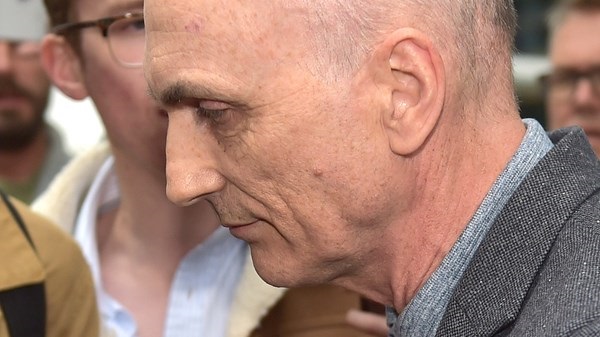 The British Labour party has arrived with the suspension of MP Chris Williamson for anti-semitism
(Image by BreakingNews.ie)   Details   DMCA

"McCarthyism" is a word thrown around a lot nowadays, and in the process its true meaning and horror has been increasingly obscured.

McCarthyism is not just the hounding of someone because their views are unpopular. It is the creation by the powerful of a perfect, self-rationalising system of incrimination denying the victim a voice, even in their own defence. It presents the accused as an enemy so dangerous, their ideas so corrupting, that they must be silenced from the outset. Their only chance of rehabilitation is prostration before their accusers and utter repentance.

McCarthyism, in other words, is the modern political parallel of the witch hunt.

In an earlier era, the guilt of women accused of witchcraft was tested through the ducking stool. If a woman drowned, she was innocent; if she survived, she was guilty and burnt at the stake. A foolproof system that created an endless supply of the wicked, justifying the status and salaries of the men charged with hunting down ever more of these diabolical women.

And that is the Medieval equivalent of where the British Labour party has arrived, with the suspension of MP Chris Williamson for anti-semitism.

Revenge of the Blairites

Williamson, it should be noted, is widely seen as a key ally of Jeremy Corbyn, a democratic socialist who was propelled unexpectedly into the Labour leadership nearly four years ago by its members. His elevation infuriated most of the party's MPs, who hanker for the return of the New Labour era under Tony Blair, when the party firmly occupied the political centre.

Corbyn's success has also outraged vocal supporters of Israel both in the Labour party some 80 MPs are stalwart members of Labour Friends of Israel and in the UK media. Corbyn is the first British party leader in sight of power to prefer the Palestinians' right to justice over Israel's continuing oppression of the Palestinians.

For these reasons, the Blairite MPs have been trying to oust Corbyn any way they can. First through a failed re-run of the leadership contest and then by assisting the corporate media which is equally opposed to Corbyn in smearing him variously as a shambles, a misogynist, a sympathiser with terrorists, a Russian asset, and finally as an "enabler" of anti-semitism.

This last accusation has proved the most fruitful after the Israel lobby began to expand the definition of anti-semitism to include not just hatred of Jews but also criticism of Israel. Labour was eventually forced to accept a redefinition, formulated by the International Holocaust Remembrance Alliance, that conflates anti-Zionism opposition to Israel's violent creation on the Palestinians' homeland with anti-semitism.

Once the mud stuck through repetition, a vocal group of Labour MPs began denouncing the party for being "institutionally anti-semitic", "endemically anti-semitic" and a "cesspit of anti-semitism". The slurs continued relentlessly, even as statistics proved the accusation to be groundless. The figures show that anti-semitism exists only in the margins of the party, as racism does in all walks of life.

Meanwhile, the smears overshadowed the very provable fact that anti-semitism and other forms of racism are rearing their head dangerously on the political right.

But the witchfinders were never interested in the political reality. They wanted a never-ending war a policy of "zero tolerance" to root out an evil in their midst, a supposed "hard left" given succour by Corbyn and his acolytes.

This is the context for understanding Williamson's "crime".

Related Topic(s): Anti-semitic; Anti-semitism; Antisemitism; Crisis; Criticism; Israel; Jeremy Corbyn; Jewish; Labour Party; Media; (more...) Palestinian; People; Pro-israel; Racism; Split, Add Tags  (less...)
Add to My Group(s)
Go To Commenting
The views expressed herein are the sole responsibility of the author and do not necessarily reflect those of this website or its editors.