Lucknow (Uttar Pradesh, India): 32 year old Kanshiram undergoes a complete transformation as he goes behind the microphone talking to his listeners on the Community Radio (CR). Formerly a bus 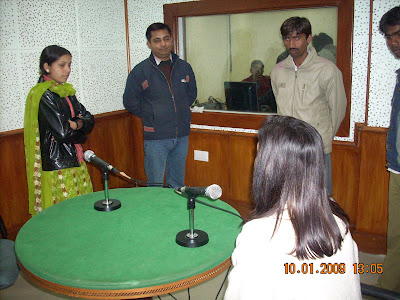 (Image by Unknown Owner)   Details   DMCA
conductor who used to ferry passengers to and fro from the remote village of Lalitpur, today he works as a radio jockey (RJ) at the newly set up community radio station here. "I can't believe I am now a RJ broadcasting and anchoring radio programmes. It gives me an immense sense of satisfaction that I am doing something for the society. What makes it even more meaningful is the fact that I get to see the real issues through my work and and also provide solutions for it."

Sentiments that are also echoed by Sunita Chandel, a village housewife, she is now one of the twelve community reporters the radio station has, “It was unheard of until now that a daughter-in-law of the village, would be actually recording programmes, editing, reporting and getting involved in solving women related issues. Initially there were lots of questions and refusals to grant permission at home but once my family and society realised how productive the work was they gave their permission."

Interestingly both Kanshiram and Sunita are part of a new era in communication, one that was much needed until now. But then the concept of community radios has long been the demand of rural India, so much so that today it is a reality. Predictably doubling up as a medium of entertainment and an effective mode of information and 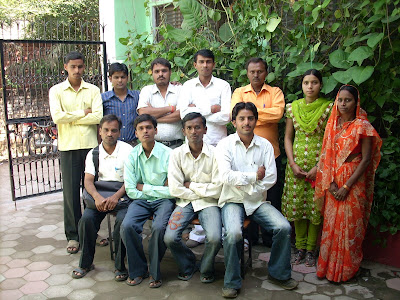 (Image by Unknown Owner)   Details   DMCA
awareness, the first community radio station in Lalitpur, UP is all set to go on air soon.

An initiative of department of Planning, Government of Uttar Pradesh (UP), UNICEF office for Uttar Pradesh and Ideosync Media Combine, community radio is being geared up as an important means of community outreach. Not only in the state of UP but Uttarakhand, too. Jharkhand, Gujrat and Bihar are conventional radio stations that have been making waves ushering in a change no other form of communication could achieve so far.

Mr Tapas Datta, Programme Manager, UNICEF, elucidates,"The few examples we have seen so far on how community radio can be used as a powerful tool of information and awareness goes on to prove that it has now become an integral part of democratic process. It is like a double edged sword which focuses not only on the interactive roles of individually shaping the lives of people but at the same time facilitating a more horizontal spread of information which is ushering in a remarkable change in behaviours and attitudes."

And with Lalit Lokvani, situated 22 km from Lalitpur in Alapur village of Birdha block, making a beginning with over a lakh eager listeners within its 15 km transmission range covering 60 villages, radio will never be the same again. While a dry run has been initiated, the actual transmission will start after getting the license from the Ministry of Information and Broadcasting soon, the station has been granted the frequency at 90.4 Megahertz.

And what programmes will the villagers get to hear?

Says Mridul Srivastava, station director of Lalit Lokvani, “Community radio is the real voice of the people, it is a communication service that caters to the interests and needs of a certain area, its culture, craft, cuisine and above all social and developmental issues. Most of our programmes will have participants from within the village community itself. In fact the narrow casting has been so successful that we are getting requests by the local candidates of various political parties to campaign for them through our community radio station.”

Adds Mazboot Singh, Community Reporter, Lalit Lokvani, Lalitpur, UP, recounting his experiences on how the CR station in Lalitpur helped in bringing about women's empowerment "Lalit Lokvani proved to be a powerful motivator for the local women to come and participate in the radio programmes and also campaign for their rights and rights of the community as a whole. Though we are yet to start broadcasting, the demands for our programmes are so high that we are narrow casting even now."

But what is extraordinary is that the community radio stations are doubling up as nerve centers in the villages of Uttarakhand and Jharkhand as well.

Citing examples of how their community radio station 'Mandakini Ki Awaaz' in Uttarakhand was raising relevant issues, Manvendra Negi, Station Manager of the community radio station elaborated, "Community radio can be used to solve many issues of a social and cultural nature simply as it invites active participation from the community. As its a collaborative effort of SSGs, NGOs, Gram Panchayats and community reporters, the impact it has is far more lasting than any other medium. Every social issue and government run program for the benefit of the community gets attention and information reaches those who need it most. What more can a communication media ask for?"

"Using photographs as the background we run programs with audio provided by our CRs and it has been very well received. The two pronged approach of CR thus makes it doubly meaningful for community outreach programs as the imapct of visuals are always more."

Bobby Ramakant is a development journalist and has been writing on development issues since 1991. Health is one of the key focus areas he writes on. He is also a World Health Organization (WHO)'s WNTD awardee for 2008
Related Topic(s): Broadcasting; Change; Community; Community; India; Media; Radio; Radio; Radio, Add Tags
Add to My Group(s)
Go To Commenting
The views expressed herein are the sole responsibility of the author and do not necessarily reflect those of this website or its editors.