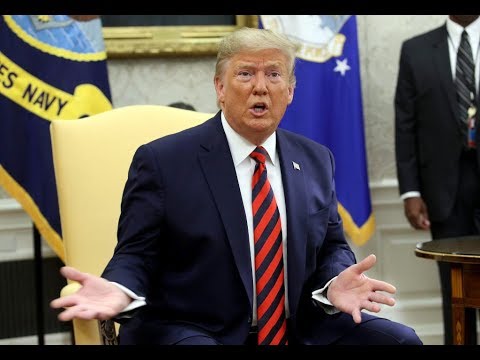 The Wall Street Journal reported Friday that in the course of his conversation in July with Ukrainian president Volodymyr Zelensky, Trump pressed him on eight separate occasions to investigate Democratic presidential contender Joe Biden.

Biden when vice president is known to have pressured the Ukrainian government to fire a prosecutor whom the International Monetary Fund and the Obama administration felt to be ineffective in dealing with corruption...The prosecutor had once upon a time investigated a company on the board of which Biden's son Hunter served. But by the time Biden exerted his pressure, that investigation was dormant and there were never any Ukrainian findings of corruption on the part of Hunter Biden.

This is a non-story, but Trump has a history of trumping up non-stories and using them to smear his opponents, as he and his surrogates did to Hillary Clinton in 2016.

Trump's pressure on Zelensky to investigate Biden constitutes asking a foreign country to intervene in a US election.

As the Law and Crime blog points out "It should be noted that the initial reporting on the whistleblower complaint said that concerns were raised about a 'promise' Trump made to a foreign leader."

We do not know what Trump might have promised Zelensky, but if he did suggest an inducement to the Ukrainian government to cooperate with Rudy Giuliani in investigating Biden, then Trump was offering a bribe.

We know that Trump has leverage over Zelensky, since Ukraine is facing Russian occupation of Crimea and an ongoing intervention in eastern Ukraine, and Trump can either help Kyiv or leave it to the tender mercies of Vladimir Putin.

In August Congress appropriated $250 million for Ukraine, but Trump stopped it from going to Zelensky. He recently reinstated it. All this is very mysterious. I had originally thought that Trump stiffing Ukraine was just one more of his weird attempts to appease Putin. But you have to wonder whether Trump's denial of aid was further pressure on Kyiv.

So bribery is an impeachable offense.

"The President, Vice President and all civil Officers of the United States, shall be removed from Office on Impeachment for, and Conviction of, Treason, Bribery, or other High crimes and Misdemeanors.

Philip Bobbitt, of the Columbia University Law School, pointed out a couple years ago at Just Security that bribery is actually two possible offenses here. One is to accept a bribe. The other is to offer a bribe.

Bobbitt argues that Trump appears to have offered Comey the possibility of keeping his job as FBI director if he would quash any investigation into Trump, and that this offer should be construed as a bribe.

Related Topic(s): Bribery Influence Peddling; Criminal Prosecution; Impeachment; Trump Crime; Trump Prosecution; Ukraine; Whistleblower, Add Tags
Add to My Group(s)
Go To Commenting
The views expressed herein are the sole responsibility of the author and do not necessarily reflect those of this website or its editors.