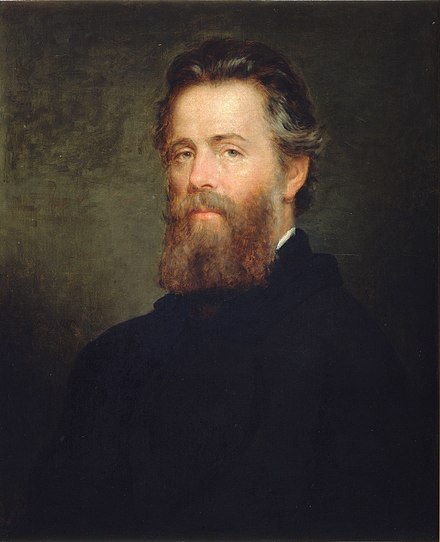 Young Melville's anonymously published two-part 1850 article "Hawthorne and His Mosses" not only celebrates Hawthorne's 1846 book Mosses from an Old Manse, but also serves Melville's growing sense of the emergence of distinctively American literature in the still young American Republic. Thus, his anonymous article celebrating the American author Hawthorne was also a nationalistic literary manifesto - and the young author Melville hoped to be a significant part of the distinctively American literature emerging in the young American Republic.

But is Melville's bold nationalistic 1850 literary manifesto the manifestation and expression in him of what Friedrich Nietzsche (1844-1900) later came to refer to as the will to power?

Now, the young Melville's paternal grandfather Thomas Melvill (sic; 1751-1832) and his maternal grandfather Peter Gansevoort (1749-1812) were celebrated heroes in the young American Republic. However, despite young Melville's family and class background, his formal education had been limited because of the untimely death of his father Allan Melvill (sic; 1782-1832), who left his widow Maria Gansevoort Melville (sic; 1791-1872) and family in financial distress. In any event, with Melville's family background, it is not exactly surprising that he would think in nationalistic terms in his 1850 literary manifesto.

In Dr. Henry A. Murray's lengthy "Introduction" and "Explanatory Notes" to the 1949 edition of Melville's Pierre; or, The Ambiguities, edited by Henry A. Murray (New York: Hendricks House, pages xiii-ciii and 429-504), Dr. Murray surveys the British literary works that Melville had used as exemplars in writing his 1852 novel.

Now, in my OEN article "Hershel Parker on the Making of Melville the Poet" (dated September 1, 2021), I have discussed certain highlights of Hershel Parker's 2008 book Melville: The Making of the Poet (Northwestern University Press) in connection with the American Jesuit Walter J. Ong's discussion of residual orality:

Related Topic(s): Novel; Novels; Reviews; Reviews_ Books, Add Tags
Add to My Group(s)
Go To Commenting
The views expressed herein are the sole responsibility of the author and do not necessarily reflect those of this website or its editors.