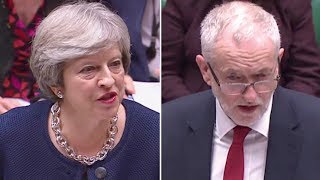 As the clock ticks down on Britain's exit from the European Union, one could not go far wrong casting British Labour Party leader Jeremy Corbyn as the hopeful Miranda in Shakespeare's Tempest: "How beauteous mankind is! O brave new world that has such people in't." And Conservative Party Prime Minister Theresa May as Lady Macbeth: "Out damned spot, out, I say!"

With the French sharpening their knives, the Tories in disarray, the Irish demanding answers, and a scant 17 months to go before Brexit kicks in, the whole matter is making for some pretty good theater. The difficulty is distinguishing between tragedy and farce.

The Conservative's Party's Oct. 1-4 conference in Manchester was certainly low comedy. The meeting hall was half empty, and May's signature address was torpedoed by a coughing fit and a prankster who handed her a layoff notice. Then the Tories' vapid slogan "Building a country that works for everyone" fell on to the stage. And several of May's cabinet members were openly jockeying to replace her.

In contrast, the Labour Party's conference at Brighton a week earlier was jam packed with young activists busily writing position papers, and Corbyn gave a rousing speech that called for rolling back austerity measures, raising taxes on the wealthy and investing in education, health care and technology.

Looming over all of this is March 2019, the date by which the complex issues involving Britain's divorce from the EU need to be resolved. The actual timeline is even shorter, since it will take at least six months for the European parliament and the EU's 28 members to ratify any agreement.

Keeping all those ducks in a row is going to take considerable skill, something May and the Conservatives have shown not a whit of.

The key questions to be resolved revolve around people and money, of which the first is the stickiest.

Conn M. Hallinan is a columnist for Foreign Policy In Focus, "A Think Tank Without Walls, and an independent journalist. He holds a PhD in Anthropology from the University of California, Berkeley. He oversaw the (more...)
Related Topic(s): Brexit; Great Britain; Issues; Labour Party, Add Tags
Add to My Group(s)
Go To Commenting
The views expressed herein are the sole responsibility of the author and do not necessarily reflect those of this website or its editors.