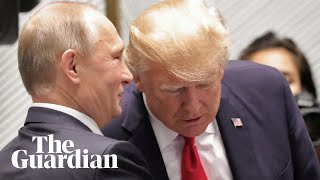 Based on publicly available evidence there is a compelling case that special counsel Robert Mueller could indict Russian dictator Vladimir Putin for crimes involving multiple violations of American law, as the U.S. once indicted former Panamanian strongman Manuel Noriega.

Alternatively, in a course of action I would recommend Mueller consider, he could name Putin as an unindicted co-conspirator for any crimes that could be documented with facts and detailed under law.

All Americans, including all Republicans serving in Congress, must fully understand the dangerous implications of the continuing covert war waged against American democracy, in violation of American law, by Russian operatives acting under the command and control of Putin.

Were Mueller and his special counsel team to name Putin as an unindicted co-conspirator, and publicly detail the full list of crimes that have been committed during these attacks against American democracy, they would offer America and the world a breathtaking case that every democratic citizen must fully understand.

Reasonable people hope that relations between America and Russia can be restored to normalcy and mutually beneficial relations can be established between our nations. This can only happen when Putin ends his war against American democracy, which American intelligence, counterintelligence and law enforcement agencies warn is continuing today. These crimes appear designed to continue against our national unity, national security and national elections in 2018 and 2020, with ever-growing attacks and ever-increasing violations of American law.

Robert Mueller and his special counsel team offer the great bulwark of protection and defense against this attack against our country by a hostile power that wishes us ill. It is the truth that sets our nation free and the law that protects our nation's security as much as guns, bombs and courageous troops.

For these reasons Congress should make it clear that any effort by President Trump to fire Mueller or grant pardons to those who are found guilty or suspected of crimes involving this Russian attack against America would constitute an impeachable offense. The president's supporters in Congress state that this will not happen. Hopefully they are right, but the fact that these actions would bring the most severe legal and constitutional consequences should be made crystal clear to the president and his advisers today.

Some who travel in Trump circles are facing a cold Russian winter in the American justice system. There have already been two indictments and one major plea bargain. Almost certainly there will be more of both in the coming weeks and months.

There is no need to list the well-known names who have been the subject of speculation, and there is a need to reiterate that no guilt or innocence has yet been determined about anyone.

However, it is self-destructive and damaging to America for the president to constantly attack, criticize, berate or undermine the work of legal or congressional authorities investigating the Russian crimes against democracy.

It would be an abuse of power for the president to pressure the Justice Department or FBI to initiate a wrongful attack against a political opponent such as Hillary Clinton. Readers should revisit the articles of impeachment against Richard Nixon, passed by the House Judiciary Committee in 1974, to understand the grave implications of this presidential conduct.

The fact is: Putin hated Clinton. The truth is: Putin worked to elect Trump. Any lie to the contrary does no service to the political or legal interests of the president. Nor do partisan Republican actions in Congress that misuse taxpayer money to continue legislative vendettas against Clinton, which will not succeed in diverting the crucial investigations of the Russian attacks against America and do not provide any defense for those under suspicion in them.

Robert Mueller and his special counsel team are the vital bulwarks of American democracy under attack from Russian aggression. The innocent should be cleared. The guilty should be convicted. The truth should be revealed. The Russian attacks must end.

Related Topic(s): Democracy; Elections; Intelligence; Mueller Investigation; Vladimir Putin, Add Tags
Add to My Group(s)
Go To Commenting
The views expressed herein are the sole responsibility of the author and do not necessarily reflect those of this website or its editors.