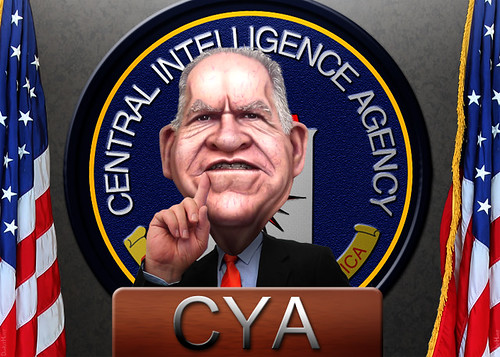 The rubbish released yesterday by CNN about the blackmail material that the Russians supposedly have on President-elect Trump is not to be taken seriously. The episode is, nonetheless, quite serious.

CIA Director John Brennan seems to have concluded that with his patron/president gone, he (Brennan) will be "thrown under the bus," as smart people say -- and do -- in Washington. If the Trump administration folks are as vindictive as Brennan fears (and he has given them a lot to be vindictive about), there is much to blame Brennan for, including serious crimes.

It is possible to regard this latest outrage as a kind of prophylactic: If Trump goes after Brennan, the former CIA chief can try to make it appear to be retaliation for "the goods Brennan has on Trump -- but (of course) cannot reveal in detail because of the sensitivity of 'sources and methods.'"

"At first read, this has all the hallmarks of a clever fabrication, the sort of thing we at CIA used to do in Europe in the 1970s and 1980s."

What's at Stake: CIA vs. Trump

New Senate Minority Leader Charles Schumer (D-N.Y.) said Tuesday that President-elect Donald Trump is "being really dumb" by taking on the intelligence community and its assessments on Russia's cyber activities.

"Let me tell you, you take on the intelligence community, they have six ways from Sunday at getting back at you," Schumer told MSNBC's Rachel Maddow. "So even for a practical, supposedly hard-nosed businessman, he's being really dumb to do this."

Big Stakes: And the Winner Will Be ...

Ray McGovern works with Tell the Word, the publishing arm of the ecumenical Church of the Saviour in inner-city Washington. He was an Army infantry/intelligence officer and then a CIA analyst for 27 years, and is now on the Steering Group of Veteran Intelligence Professionals for Sanity (VIPS). His (more...)
Related Topic(s): CIA; Cia Director John Brennan; Evidence; Intelligence; Wikileaks, Add Tags
Add to My Group(s)
Go To Commenting
The views expressed herein are the sole responsibility of the author and do not necessarily reflect those of this website or its editors.