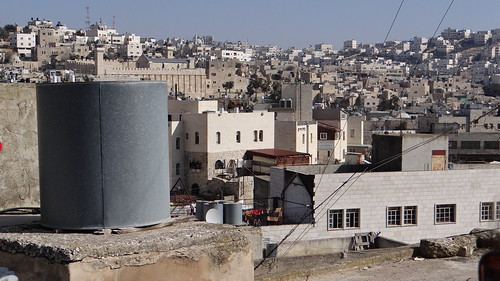 Ido Even-Paz switched on his body camera as his tour group decamped from the bus in Hebron. The former Israeli soldier wanted to document any trouble we might encounter in this, the largest Palestinian city in the occupied West Bank.

It was not Hebron's Palestinian residents who concerned him. He was worried about Israelis -- Jewish religious extremists and the soldiers there to guard them -- who have seized control of much of the city centre.

Mr Even-Paz, 34, first served as a soldier in Hebron in the early 2000s. Today he belongs to Breaking the Silence, a group of former soldiers turned whistleblowers who leads tours into the heart of Israel's settlement enterprise. After 14 years of operations, however, Breaking the Silence is today facing ever-more formidable challenges.

Hebron, 30km south of Jerusalem, is a microcosm of the occupation. A handful of settlers moved here uninvited five decades ago, drawn in part to the what Israelis call the Tomb of the Patriarchs and Palestinians the Ibrahimi mosque. The Herod-era building is erected over the putative burial site of Abraham, Patriarch in Judaism, Christianity and Islam. Since then the settler ranks have swollen to nearly 900 -- aided by the Israeli army.

Despite their relatively small number, however, their territorial footprint has been expanding relentlessly, and now covers some 2 square kilometres.

The settlers and military, says Mr Even-Paz, have worked hand in hand to hijack the freedoms of some 230,000 Palestinians and turn Hebron's once-vibrant commercial centre into a ghost town. All of this has happened with the apparent blessing of the Israeli government.

When Mr Even-Paz arrived in Hebron as a teen soldier at the height of the Second Intifada, he was keen to distinguish himself as a combat soldier by fighting Palestinian "terrorists", and impress his father, a retired career officer.

His political awakening however, didn't begin until much later, in 2008, as Israel launched a massive assault on the Gaza Strip. Later he discovered the more than 1,000 testimonies recorded by Breaking the Silence, in which Israelis acknowledged that they had participated in or witnessed war crimes during their military service.

"Those stories were exactly like mine. I thought I'd done nothing significant during my military service, that it was boring. I started to realise it was the very mundanity of the occupation -- its round-the-clock oppression of Palestinians -- that was the core of the problem."

He believes the problem of the occupation is systemic rather than the result of misconduct by individual soldiers.

"Whatever a soldier believes when they begin their military service, there is no way to behave ethically in the occupied territories," he says. "It's a system in which Palestinians are always treated as inferior, always viewed as the enemy, whoever they are.

"Every day the job is to inflict collective punishment. We were told explicitly that we were waging psychological war, that we were there to intimidate them.

Related Topic(s): Hebron; Israel, Add Tags
Add to My Group(s)
Go To Commenting
The views expressed herein are the sole responsibility of the author and do not necessarily reflect those of this website or its editors.