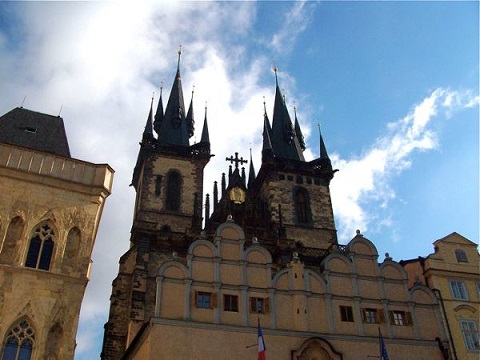 Breaking up is hard to do especially if the political divorce is not sanctioned by the marriage counselors of Washington London Paris and Brussels
(Image by Prague-Stay.com)   Details   DMCA

The passage in the 1960s song by Burt Bacharach and Hal David "Make it Easy on Yourself" "breaking up is so very hard to do" means the same thing for aspirant nations that want to go their own way. It has not been for a lack of desire that some would-be nations have found it almost impossible to separate from their mother countries. Outside interests from lands far away have deemed it dangerous to foster new nations in today's political and economic climate.

Since 1990, there have been some sixty referenda by regions or territories wishing to become independent or autonomous from their parent nation. Of these, only about twenty have been successful in a change of status. Forty have either failed to pass, some in dubiously close votes amid charges of election fraudor were not recognized by the governing authority.

Successful independence or autonomy referenda have only been successful if a combination of the neo-colonial foreign affairs infrastructures of Foggy Bottom in Washington, Whitehall in London, and the Quai d'Orsay in Paris gave them their blessings or arranged for predetermined outcomes.

From 1990 to 1991, particularly with the collapse of Yugoslavia and the Soviet Union, there was a rash of independence referenda held in Slovenia, Armenia, Azerbaijan, Croatia, Estonia, Kosovo, Latvia, Lithuania, Macedonia (now North Macedonia), Nagorno-Karabakh, Ukraine, Transnistria, Gagauzia, Turkmenistan, and Uzbekistan. All of the plebiscites resulted in independence, except for Kosovo, Nagorno-Karabakh, Transnistria, and Gagauzia.

On September 7, 1990, the ethnic Albanian members of the dissolved Kosovo Assembly in the Yugoslav province of Kosovo met in secret in Kačanik and declared the "Republic of Kosova." The independence was rejected by Yugoslavia, but, more importantly, by the United States, Britain, France, and Germany. "Kosova" was only recognized by Albania. The neo-colonialists in Washington, London, and Paris, as well as the recently unified Germany, had plans for an independent Kosovo but 1990 was too early. The West had to demolish Yugoslavia completely before Kosovo was recognized as independent. That time would come in 2008, when the Kosovo Assembly, backed up by NATO and the European Union, declared the independence of the Republic of Kosovo.

The Kosovo Liberation Army (KLA), once deemed a terrorist group by NATO and the EU, was welcomed in Washington, London, Brussels, Paris, Berlin, and the International Court of Justice as the new government of the ethnic Albanian-ruled nation. For the ethnic Serbs of the former Autonomous Province of Kosovo and Metohija, as well as Serbia, the move was rejected outright. Hypocritically, neither NATO nor the EU required an independence referendum. The 1990 referendum, which was never recognized by the West as legitimate, was, all of a sudden, seen as representing the will of the people of Kosovo. That is, of course, except for the Serbs of North Kosovo. Kosovo's membership applicationwas rejected for United Nations. Russia, China, Spain, Hungary, and other nations rejected the former province's declaration of independence.

It is noteworthy that the thorny issue of Macedonia, the name of which Greece rejected because Athens felt it represented territorial designs on parts of northern Greece, was settled when Macedonia became "North Macedonia." However, when there was a vote by the Assembly of the Community of Municipalities of the Autonomous Province of Kosovo and Metohijain Kosovska Mitrovica in northern Kosovo that called for the Serbs, Gorani, Bosniaks, and Romani of North Kosovo to be recognized as autonomous under the name of North Kosovo, the idea was rejected without consideration by the United Nations Mission in Kosovo (UNMIK), Washington, London, Paris, Berlin, and Brussels. Some democratic votes carry more weight than others among the status quo enthusiasts of Foggy Bottom, Whitehall, and the Q'uai d'Orsay.

A February/March 1992 referendum on independence of Bosnia and Herzegovina, boycotted by Bosnian Serbs, resulted in 99 percent for independence. Bosnia-Herzegovina, which began its existence as a nearly-failed state, was recognized by the EU, NATO, and UN.

On the other hand, Nagorno-Karabakh, Transnistria, South Ossetia, Gagauzia, and Abkhazia all held referenda on their respective status. None of the referenda results were accepted by the EU and the UN. In the March 17, 1990 All-Union referendum designed by President Mikhail Gorbachev to continue the Soviet Union in some semblance, 52.3 percent of Abkhazia, an autonomous republic in Georgia, voted to retain their union with the Soviet Union, while Georgia boycotted the referendum.

Abkhazia's vote resulted in a de facto separation from Georgia. Two successive referenda on independence held in 1992 and 2006 in South Ossetia, formerly a part of Georgia, were rejected by the UN, NATO, EU, and Organization for Cooperation and Security in Europe (OSCE). Transnistria's referendum on independence from Moldova was 97.2 in favor of statehood. In 1991, the "Congress of People's Deputies of the Steppe South of the Moldavian SSR" declared the Gagauz Republic. Although a majority of the people in the autonomous republic favored independence, it was rejected by Moldova and EU and NATO. 1991 and 2006 referenda on the independence of Nagorno-Karabakh as the Republic of Artsakh passed overwhelmingly but were rejected by the EU, OSCE, and UN. Rejected by the status quo enthusiasts of the UN and EU, Artsakh, Transnistria, South Ossetia, and Abkhazia have formed their own international organization, the Commonwealth of Unrecognized States.

The 1990s were turbulent times for would-be nation states. An April 1993 referendum on Eritrea's independence from Ethiopia passed with 99.83 percent in favor of statehood. Unlike some of the aspirant nations of the former USSR and Yugoslavia, Eritrea was warmly accepted into the international community of nations. In some territories, attempts to change official status were met with chicanery on the part of territorial and metropolitan governments. That was the case in 1993 with a status referendum in the U.S. Virgin Islands. A mere 31.4 percent turnout in the referendum, which opted for the status quo in any event, saw the referendum rejected as null and void. The manipulation of the referendum ensured a mere 4.96 favoring independence. Similar manipulative contrivances in political status referenda in Puerto Rico in 1993, 1998,2012, and 2017resulted in the independence option receiving paltry 4.4 percent, 2.2 percent, 5.5 percent, and 1.5 percent, respectively. President Donald Trump has repeatedly shown his racist and xenophobic disdain for Puerto Rico and the Virgin Islands, often failing to recognize either territory as part of the United States or their residents as U.S. citizens.

The Netherlands has also cleverly manipulated status referenda in its Caribbean colonies of Curacao, Aruba, Bonaire, Sint Maarten, Saba, and Saint Eustatius to maintain its colonial foothold in the region. A 1995 independence referendum in the British territory of Bermuda required independence to be approved by 40 percent of those eligible to vote and at least 50 percent of those who voted. The independence option failed with only 25.88 percent supporting nationhood. The Caribbean island of Nevis saw independence stymied in a 1998 referendum. Although 62 percent of voters opted for independence, it was rejected because a two-thirds majority was not achieved. The same machination was used by colonial power New Zealand in back-to-back referenda for the Tokelau islands to become an associated state, with de facto independence, in 2006 and 2007. Both times, 60 percent voted for associated state status, but a two-thirds majority wasrequired. In the world of aspirant nations, the game is changed and the math is negotiable in order to suit the desires of the neo-colonialists and transnational interests.

Quebec independence failed by less than 1 percent of the vote in a 1995 referendum. Turnout was massive, over 93 percent. There was evidence that the 1995 independence referendum, like that of 1980, was manipulated by outside forces, including the U.S. Central Intelligence Agency.

Related Topic(s): Brussels; Croatia; Donald Trump; Georgia The Country; International; Kosovo; London; Macedonia; Paris; People; (more...) Power; Secretary Of State Mike Pompeo; Yugoslavia, Add Tags  (less...)
Add to My Group(s)
Go To Commenting
The views expressed herein are the sole responsibility of the author and do not necessarily reflect those of this website or its editors.