First from From RTE News, Ireland

Ousted Haitian dictator Jean-Claude 'Baby Doc' Duvalier has been charged with corruption and misappropriation of funds, his lawyer confirmed this evening. 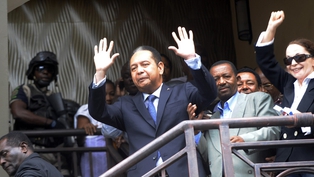 
Ousted Haitian dictator Jean-Claude 'Baby Doc' Duvalier has been charged with corruption and misappropriation of funds, his lawyer confirmed this evening.


'Yes he has been charged,' lawyer Gervais Charles said after Duvalier, 59, was hauled before prosecutors less than 48 hours after suddenly returning to Haiti after more than two decades in exile. 'But I don't understand it,' Charles added.

It was not yet clear whether Duvalier, who ruled Haiti with an iron fist from 1971-1986, would be taken to prison after his questioning or placed under house arrest somewhere else.

Haitian police detained the former dictator earlier today after authorities said he would be questioned over money stolen during his rule.

He is accused by human rights groups of being responsible for the killing and torture of opponents during his 15 years in power.

Haitian prosecutors have charged Jean-Claude "Baby Doc" Duvalier, a former president, with several crimes, including corruption, theft and the misappropriation of funds during his 15-year rule.

Police took Duvalier from the hotel where he was staying in Port-au-Prince on Tuesday, less than 48 hours after he returned to his homeland having spent 25 years in political exile.

"His fate is now in the hands of the investigating judge. We have brought charges against him," Aristidas Auguste, Port-au-Prince's chief prosecutor, said.

The charges must now be investigated by the judge who will decide whether a judicial case should go ahead.

Duvalier was allowed to go free after several hours in a closed-court session on Tuesday, although he is not allowed to leave the country.

I am a student of history, religion, exoteric and esoteric, the Humanities in general and a tempered advocate for the ultimate manifestation of peace, justice and the unity of humankind through self-realization and mutual respect, although I am not (more...)
Related Topic(s): 2010 Haitian Disaster Two; Baby Doc Duvalier; Dictator Dictatorships; Duvalier; Haiti Earthquake; Haitian Elections; Present_Day_Haiti; US-Haiti Policy, Add Tags
Add to My Group(s)
Go To Commenting
The views expressed herein are the sole responsibility of the author and do not necessarily reflect those of this website or its editors.