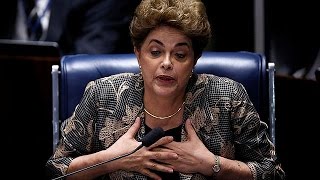 Dilma Rousseff entered the Senate and calmly stared down her accusers. She left with her head held high after exhorting those Senators to vote with their conscience.

Most of those politicians present probably had no idea what conscience means; they're no more than corrupt messenger boys. But the Brazilian collective unconscious -- Jung to the rescue -- will be marked.

President Dilma Rousseff, in a detailed, occasionally emotional speech, defended herself with honor and dignity from accusations she committed a "crime of responsibility." She was not actually facing a political cesspool, but that "Angel of History" so beloved by Walter Benjamin. History will judge her kindly.

Meanwhile, it ain't over till a dodgy politico sings. As I write, Rousseff is on the way to be stripped from the presidency of the world's 8th largest economy by a bunch of scoundrel-cum-coward politicos. Her only fear, she said, was the "death of democracy." Rousseff's impeachment means in practice that democratic voting in one of the world's largest democracies will be cancelled by a parliamentary coup remote-controlled by oligarchic interests. This is not, and never was, about justice; it's about dirty, nasty politics.

There is no techno-bureaucrat argument whatsoever capable of proving the President should be impeached because of state budget maneuvers that did not yield a single cent for her pockets, or to the detriment of the Treasury -- and this in an astonishingly corruption-infested nation.

If we had to rely on a single formulation to explain this charade to a global audience this should be it: The current parliamentary/institutional/big business/big banking/corporate media coup is the tool used by Brazilian oligarchs to smash the wealth distribution drive that preceded, via President Lula, the US-provoked global 2008 crisis of capitalism.

The Lula and subsequent Dilma presidencies had adopted a very Chinese "win-win" model. There was a sort of unwritten pact between social classes: The rich got even richer while the poor got less poor.

But then the crisis hit BRICS member Brazil with a vengeance. There was no Plan B -- apart from exporting commodities; the boom was over and traitors/conspirators in the opposition saw an opening to reclaim power on the wheels of the highly selective "Car Wash" corruption investigation. And yet, this being KafkaLand, the parliamentary impeachment drive against Dilma is in fact a diversionary tactic devised to "tame" Car Wash, so it wouldn't hit oligarch-controlled right-wing politicians.

The vultures and their master plan

Emir Sader, one of Brazil's top sociologists, has summed up what lies ahead: major social and political conflict; military/police repression; tearing up of the social contract; the nation reduced to a mere US vassal; an unelected, illegitimate government with no autonomy, sovereignty and geopolitically sidelined. All the while being "led" by currently interim, and President-to-be Michel Temer, a mediocre, corrupt coward who didn't even have the balls to attend the Olympics' final ceremony because he knew he would be booed out of a packed Maracana stadium.

Welcome to post-coup Brazil: Land of permanent crisis, a powerless, illegitimate, corrupt government, economic recession, and unemployment. As Sader noted, "everything positive that Brazil built this century will be thrown out by a coup."

Temer the Usurper could never aspire to Shakespearean grandeur, as a tragic figure. He's already been connected to almost $3 million in kickbacks. The current Foreign Minister, the despicable Jose Serra, a Chevron asset, has been accused of receiving over $6 million, including overseas.

Yet further serious accusations would have targeted right-wing political parties even harder -- utter devastation extended to at least half of Congress -- until they were magically "disqualified" by purposeful leaks. There's the rub: in the current Kafkaesque set up, only the "reds" -- as in the Workers' Party -- can be criminalized. Most of these shenanigans will feature in at least four documentaries currently in production about the sorry saga.

Immediately after Dilma's impeachment, the Senate plans to throw what literally amounts to a fiscal party -- based on raised salaries for Supreme Court ministers; these salaries regulate the remuneration of all Brazilian public service. Remember that Dilma is being accused of "fiscal irresponsibility."

Related Topic(s): Brazil Interim President Michel Temer; Brazilian President Dilma Rousseff; Coup; Impeachment; Politics, Add Tags
Add to My Group(s)
Go To Commenting
The views expressed herein are the sole responsibility of the author and do not necessarily reflect those of this website or its editors.