The year 2013 marks the fiftieth anniversary of the publication of Hannah Arendt's controversial critique of the trial of the Nazi war criminal Adolf Eichmann, and her work remains unambiguously pertinent. Indeed, not only do the ghosts of the past continue to haunt Eichmann in Jerusalem; another ghost - a ghost from the future - is also detectable among her words. As one reads her text, Eichmann's polar opposite, Bradley Manning, arises from Arendt's pages like a photographic negative. Presently on trial for charges that include "communicating national defense information to an unauthorized source," and "aiding the enemy," Manning succeeded in accomplishing what Eichmann was tried and executed for failing to do; Manning refused to participate in the commission of crimes against humanity. 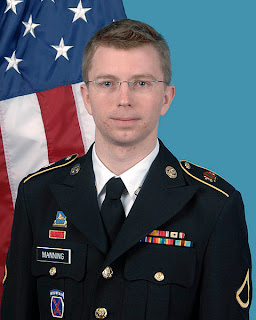 The reader must refrain from inferring that an equivalence is being drawn between the atrocities committed by the Nazi regime and those committed by the US. However shocking the genocide perpetrated by the Nazis may be, one must recognize that those crimes are not at all inconsistent with the genocidal aims that that regime repeatedly and explicitly espoused. To be sure, the US - which is also guilty of launching a war of aggression - never professed any genocidal intentions; However much it fell short, and however disingenuous it may have been, the rhetoric invoked by the US was that of the enlightenment ideal of human freedom. In this light, it should not be too contentious to maintain that the US ought to be held to a standard higher than that reserved for Nazis. No war crimes are acceptable, and the systematic denial of procedural justice, as well as outright torture, and crimes against humanity perpetrated by the US in Iraq, Afghanistan, Guantanamo, Yemen, Pakistan, and other places over the past decade are beyond reasonable dispute. Acts such as those recorded in the video Collateral Murder (titled and released to the public via Wikileaks), for example, which depict US soldiers killing innocent civilians in clear violation of International Law, not to mention such war crimes as the unabating drone attacks on civilian targets, are among those that Manning intended to stop. That Manning is facing life in prison for his actions is nothing short of a perversion of justice - as perverse as the fact that had Manning meticulously followed the rules, like Eichmann had, Manning would have been more likely to be awarded a medal than a court martial. It is this injustice - the injustice that arises from the collective adherence to unjust laws, acceding to the inertia of injustice - that Arendt referred to as the banality of evil.

Arguably Arendt's most familiar argument - and that which provides the subtitle for her piece on Eichmann - the banality of evil arose from her observation that Eichmann, rather than being some demonic, terrifying creature, one so instrumental in perpetrating monumental acts of horror, was just, as she put it, a "nobody." Describing Eichmann as a habitual "follower," in distinguishing his character from that of the stereotypical evildoer, Arendt wrote that Eichmann "not only obeyed orders, he also obeyed the law." This was, in fact, Eichmann's main defense - the same discredited defense invoked by the Nazi war criminals in 1945 at Nuremberg. Among Arendt's observations regarding Eichmann's "banal evil" was that, rather than scheming and plotting and intending to commit evil, Eichmann didn't really think at all. "His inability to speak" she writes, "was closely connected with an inability to think." The proverbial cog in the machine, a tool more than a human being, Eichmann did not resist the inertial flow of the Nazi war effort. To the extent that this applies to Eichmann, though, the opposite may be said of Manning. In spite of the claims of the prosecution, Manning consistently demonstrated an ability to act according to clearly articulated reasons. Rather than thoughtlessly obeying unjust laws, as Eichmann did, as Manning put it in his testimony before a military court earlier this year, "I believed that if the general public, especially the American public, had access to the information ... this could spark a domestic debate on the role of the military and our foreign policy in general." Manning may have violated unjust laws. However, as Martin Luther King Jr., citing Augustine of Hippo, put it in his Letter from Birmingham Jail, "an unjust law is no law at all." To be sure, should a conflict arise between justice and law, justice ought to prevail.

This is not simply rhetoric. The Law itself recognizes that to the degree that it furthers injustice, a law is invalid. The precedents established by the Nuremberg Trials - now firmly entrenched in such pillars of International Law as Article 85 and Article 17 of the Geneva Convention, not to mention the US Army's very own Field Manual - include the very principle that merely following orders does not exculpate someone from responsibility for war crimes. As Nuremberg Principle VII states, "Complicity in the commission of a crime against peace, a war crime, or a crime against humanity as set forth in Principle VI [which includes the murder of civilians, something which Manning repeatedly witnessed and attempted to obstruct] is a crime under international law." That is, in addition to his conscientious resistance, Manning had a positive legal duty to resist collaborating with war crimes. That the enemy was not at all aided by Manning's disclosure (unlike Bob Woodward's repeated and uncensured disclosures of sensitive national security information) and that no harm came to anyone because of Manning's acts is, though completely relevant, dismissed from consideration by the prosecution.

Of course, like history, "justice" is often determined by those in power. If Nazi-Germany had prevailed over the Allies in the second world war, for example, Eichmann would have most likely lived out the rest of his life in relative peace and obscurity. Likewise, had Bradley Manning followed the rules, as Eichmann meticulously followed those of the Third Reich, he would probably not be facing life in prison. In other words, had he not resisted, Manning would be guilty in fact - and in his heart, if not in a court of law - of some of the very crimes that Eichmann was found guilty of committing - and this is just how the US would have wanted it.

It is no hyperbole to remark that the precedent established in Nuremberg in 1945 is one of the most important and enduring lessons of the Holocaust. And though this lesson seems to have been lost on Barack Obama, and on many others, this lesson was not lost on Bradley Manning. Learning of the regular perpetration of war crimes, and finding himself in a position that demanded that he either do his job, like Eichmann, and become an accessory to these crimes, or resist, Manning made the decision to break this causal chain of injustice, to resist unjust laws and practices, and to act in accordance with justice.

While some of his supporters proclaim their solidarity with Manning by announcing that "we are all Bradley Manning," insofar as his supporters are not in prison - and may be unwilling to go to prison for their beliefs - it is not entirely clear what such a proclamation entails. What is patently clear, however, is that, to the degree that we accede to and conform to the dominating power of capital and the state (as opposed to the liberating power of resistance), we are all, every one of us, Adolf Eichmann.

Related Topic(s): Bradley Manning; Bradley Tusk; History; History; Injustice; Injustice; Justice; Law; Power, Add Tags
Add to My Group(s)
Go To Commenting
The views expressed herein are the sole responsibility of the author and do not necessarily reflect those of this website or its editors.

Freedom and Jobs, or Freedom from Jobs

Kaiser Obama - From WWI to WWIII

The Spirit of Columbus - Jesus Christ, Columbus, and the US Constitution

Russell Brand and the Leader Question