On Thursday, Florida's fairly progressive former Republican Governor Charlie Crist spoke in support of President Barack Obama at the Democratic National Convention in Charlotte. Crist became an independent during his failed 2010 run for the U.S. Senate, after it became clear that his party was likely to nominate Marco Rubio for the seat instead. All of that had come about after Crist had demonstrated the temerity to famously embrace the President when he came to pitch the stimulus bill in the Sunshine State, which ended up saving tens of thousands of Florida jobs after the 2008 global economic meltdown threatened to plunge the country into another Great Depression.

Echoing Ronald Reagan's famously-cited reasons for the former President's own switch from the Democratic Party to the Republican Party, Crist explained during his speech last night: "I can certainly relate. I didn't leave the Republican Party; it left me."

"Then again," he added, "as my friend Jeb Bush recently noted, Reagan himself would have been too moderate and too reasonable for today's GOP."

With all of that, here is how CNN described Crist during his speech yesterday... 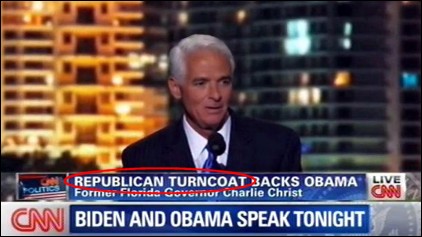 For the record, American Heritage Dictionary defines defines the word "turncoat" as "One who traitorously switches allegiance."

West's Encyclopedia of American Law redirects web-queries for the word "turncoat" to its page on "treason," which is defined there as "The betrayal of one's own country by waging war against it or by consciously or purposely acting to aid its enemies."

Perhaps we missed it, but we don't remember the "liberal" CNN similarly labeling Democrat-turned-Republican Artur Davis a "turncoat" when he spoke at the RNC last week in favor of Mitt Romney. Or did they just reserve that distinguished label only for Republican-turned-independent Charlie Crist when he spoke on behalf of Barack Obama?

In any event, CNN is in terrific company with their slur. They weren't the only one to compare Crist to a traitor by describing him as a "turncoat." Rightwing extremist Glenn Beck's pretend "news" site The Blaze did so as well:

Unlike CNN, however, Beck's site appears to have done the right thing and removed that descriptor from its headline (though it's still in the page name) after initially using it.

To our knowledge, CNN has issued no apology for likening the former Governor of Florida to a traitor, which, by the way, is still punishable by death in the United States.

Brad Friedman publishes Bradblog.com
Related Topic(s): CNN; Charlie Crist; Democratic; Glenn Beck; Republican; Smear Tactics, Add Tags
Add to My Group(s)
Go To Commenting
The views expressed herein are the sole responsibility of the author and do not necessarily reflect those of this website or its editors.