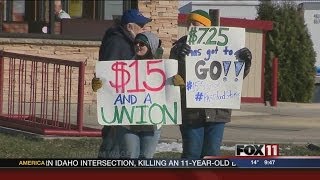 Fast-food workers across the country are calling for a wage of $15 per hour and the right to form a union without retaliation.
(Image by YouTube, Channel: WLUK-TV FOX 11)   Details   DMCA

For the past 30 years, no matter which party has been in power, the US economy has produced more and more "bad" jobs because the Race to the Bottom is ruling class policy.

A Brookings Institution study shows 44 percent of all American workers toil in "low-wage" jobs, with median earnings of $18,000 a year. Most of them are adults in their prime working years, whose paychecks provide the main sustenance for their families, 20 percent of which live at below 150 percent of the poverty line. Blacks and Latinos are overrepresented in low-paid employment, but more than half of these bad jobs are held by whites.

The corporate consensus, shared by its monopolized media, is that the economy is booming, which only confirms that the Race to the Bottom is ruling class policy, no matter how much the "liberals" at places like Brookings bemoan the hardships inflicted on the working poor.

Working class precarity is built into the system, by design. Another study, measuring the Job Quality Index, shows that the proliferation of low-paid work isn't a hangover from the 2008 meltdown, but a characteristic of late stage capitalism. "In 1990, the jobs were pretty much evenly divided," said one of the creators of the index. "We discovered that 63% of all jobs that were created since 1990 were low-wage, low-hour jobs." The data show the Race to the Bottom has accelerated for U.S. workers under both Republican and Democratic administrations: the elder and younger Bushes, Clinton, Obama, and now Trump, who is running for re-election on the strength of the economy.

The duopoly system is a magnificent mechanism of corporate rule and working class ruin. When only corporate parties are permitted to govern, and corporate mouthpieces monopolize the media, capitalist-inflicted misery is made to seem natural and inevitable. The highly-educated researchers at Brookings can imagine only one way out of the downward spiral for those localities where bad jobs are the norm: "attract and grow more high-wage jobs by drawing new companies in and helping existing companies grow and increase their productivity." In other words, more capitalism, of the more socially-conscious kind. But clearly, the stock market favors precarity capitalism, which it rewards with high returns, and punishes capitalists that don't immiserate their employees or farm them out to low-wage contractors.

Low-wage labor mixes uneasily with higher-paid employment in the so-called success-story cities, as well. According to Brookings , bad jobs number "nearly one million in the Washington, D.C. region, 700,000 each in Boston and San Francisco, and 560,000 in Seattle. Addressing the challenge of low wages combined with high housing prices is a key issue in these places."

Brookings concedes that education isn't the answer. "There simply are not enough jobs paying decent wages for people without college degrees (who make up the majority of the labor force) to escape low-wage work," say the researchers. Lots of low-paid workers already have degrees. "Fourteen percent have a bachelor's degree and an additional 8% have an associate degree," according to the study.

Whole sectors have become precarity zones, where 75 percent or more of the workers earn low wages: "These include retail sales workers, cooks and food preparation workers, building cleaning workers, food and beverage serving workers, and personal care and service workers (such as child care workers and patient care assistants)," the latter being mostly female and heavily Black and brown.

The Brookings think-tankers are not permitted to think outside the tank. But they are required to make broad statements of good societal intentions. "The goal of economic development should be to support growth that is shared and enduring, increase the productivity of firms and workers, and raise standards of living for all," said the Brookings Institute's Amy Liu. But of course, that would mean forcing capitalists to restructure their practices for the common good, or the truly unthinkable! putting the economy in the hands of the workers that create the wealth, while ensuring that everyone that wants work, has it.

The proposition is quite simple, but unmentionable in the thought-free bubble imposed by monopoly media and rigged search engine algorithms. Therefore, the capitalist narrative always ends with a question mark for the hobbled intelligentsia employed to rationalize the social hell created by their think-tank funders. "'Where will the good jobs come from?' is perhaps the defining question of our contemporary political economy," the Brookings researchers write and then leave it at that, having no answer that the Lords of Capital would approve.

The Race to the Bottom fuels consolidation of wealth and power at the Top. Socialism is the only answer, a socialism rooted in the self-determination of all the peoples subjugated by capitalism since its emergence in colonialism and slavery half a millennium of unrelenting, merciless, genocidal theft of land, labor and people-hood. The "democratic" nature of this socialism lies not in ballots supervised by capitalist ruling class servants, but in the mass movement to dethrone the thieves that claim to "own" the world's resources a class so numerically tiny that we know the top guys' names, starting with Bezos. Any thoroughgoing redistribution, no matter how chaotic, would be more "democratic" than the current oligarchy, and nothing could be more irrational.

The rules and definition of democracy will be decided by people in motion in the process of building a new world.

Related Topic(s): Capitalism; Democracy; Economy; Jobs; Poverty, Add Tags
Add to My Group(s)
Go To Commenting
The views expressed herein are the sole responsibility of the author and do not necessarily reflect those of this website or its editors.