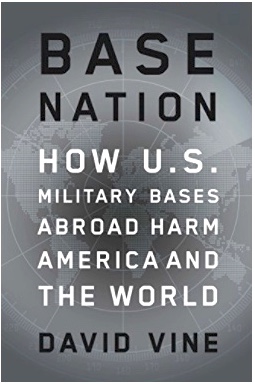 In a sane world, America's 800+ military bases would certainly be regarded as a symptom of a diseased world view, a manifestation of a pandemic borne into our midst by unhinged flag-waving champions of Red White and Blue Supremacy, who increasingly seem to be everywhere now. Such a sprawling military presence is openly promoted by an growing number of glassy-eyed fanatics in the media, among the usual suspects in the MIC, in the barren playground of think tanks and corporate-funded academia, now even on both sides of the aisle in Congress, as a necessary instrument of the America's ambitious but indisputable goal of "full spectrum dominance" and world conquest, an epic undertaking now assumed in the seats of power as the sole guarantor of national security and U.S. vital interests.

But it's clear that the bases are also a disease unto themselves. Like any virus, after they insert themselves into the host countries, a significant driver of their pathologic presence becomes self-preservation and propagation. In other words, the building of bases is a feedback loop working to seed and breed the "base system", further its growth, and extend the range of its authority and control. A base on every corner everywhere on the globe is the ultimate fulfillment of febrile fantasies both among current policymakers and the military itself.

This is neither a trivial or obvious point. There is something uniquely deranged about creating a military footprint the size of a whole planet. But no one dare question it, at least not in officially-sanctioned channels.

The constant demonization of China and Russia as aggressors and national threats gives some measure of the depth of our leadership's psychosis. Russia has ten military bases outside its borders, China one. Neither Russia or China have military bases in America's half of the globe or anywhere close. If they attack us with surface forces, they'll have to commission all the cruise ships and commercial airliners in the world to assemble an invasion force.

Were Russia, China, Venezuela, North Korea, Iran, or any of the other nations designated as "national threats" to individually or collectively establish 800+ bases scattered across Mexico, Canada, the Caribbean, "we" would certainly know why they're there. It wouldn't be to try the local cuisine, conduct scavenger hunts, or set up cultural exchange centers.

Why is it the U.S. assumes these same countries don't know why the U.S. is "over there", on their borders or within easy striking distance of their capitals, industrial centers, and domestic military installations?

David Vine has created a powerful must-read indictment of this charade, this might-makes-right muscle flexing, the irresponsible and criminal bullying it embraces, the homicidal misadventures made possible by the rapidly accelerating, malignant and ultimately self-sabotaging amplification of U.S. military power.

The expanding sprawl of U.S. military bases represents grotesque excess, colossal waste, an insult to the sovereignty of other nations, the callous dismissal of the UN Charter and the better instincts of everyone in the world who want to live in peace and harmony, and the substitution of brute force for measured and thoughtful diplomacy. America has abandoned the moral high ground to play king of the hill.

I love that line from the movie Field of Dreams: "If you build it, they will come."

I believe that meme would beautifully apply if the U.S. were establishing a regime of peace and cooperation in the world.

Unfortunately, when a country is perpetually at war, everything becomes mangled. The U.S. obsession with military bases is powered by a new mantra:

"If we build them, they will submit."