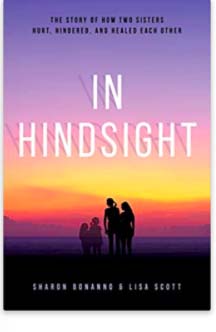 (Image by Advantage Media Group)   Details   DMCA
"When my nose was so clotted with blood [from cocaine] that I could not breathe--something that happened routinely--I went to the hospital." So writes Lisa Scott, half of the sister duo who have authored the new book Hindsight: The Story Of How Two Sisters Hurt, Hindered, And Healed Each Other But this is more than an addiction story. It includes the raw emotions of the non-addicted sister, Sharon Bonanno, who is also buffeted by the forces that cause and result from addiction.

"Lisa's letters made me furious rather than sympathetic," confessed older sister Sharon in this shared memoir. "When she acknowledged that she had done inappropriate things, it was as remorse for hurting herself. She never recognized the ways that her behavior affected other people."

In most families, the same things that sisters share--parentage, childhoods, DNA--can sometimes serve to make them rivals, especially when they're close in age. Who gets more attention? Who has better looks? Who has more friends, higher grades? Who do Mom and Dad seem to like better?

Sisters coming from a dysfunction family like Bonanno and Scott have more on their plate than simple identity struggles. In In Hindsight they tell of the early divorce of their parents and "outsider" status with their father's new family, Lisa's severe diabetes diagnosed at age six early and their conflicting and diametrically opposed ways of coping.

Some readers will relate to Lisa's personality. She confesses in the book how she used her diabetes to manipulate others and get her way and how she found that addiction helped her overcome an eating disorder. ("I'm actually grateful to cocaine for saving me from bulimia").

But others will identify with "first born" Sharon's personality when she writes, "Because I wasn't sick, and was not only older but capable and responsible, people around me assumed that I didn't need help...It also meant that no one pushed me to challenge myself."

As young adults, the sisters could not be more far apart. Sharon, though she writes that she had to repeat kindergarten as a child, goes on to have a successful teaching career. She marries and has children. Lisa, on the other hand, works at a series of odd jobs as her drug addiction and diabetes get worse. Sharon alternately tries to help Lisa--following her car after an emergency room visit to make sure she is okay at the start of the book--and throws her hands up.

Related Topic(s): Addictions; Cocaine; Crack Cocaine; Diabetes; Family; Health Diabetes; Health Psychology-Mental Health; Life-Home-Family; Psychology, Add Tags
Add to My Group(s)
Go To Commenting
The views expressed herein are the sole responsibility of the author and do not necessarily reflect those of this website or its editors.