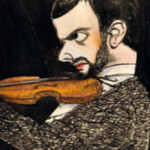 ...an ordering of images
a search for the hidden sense
an illumination of visions in the mind -such is, to me, his art.

The Swiss-born German artist Paul Klee created more masterpieces in the closing years of his life than most artists do in their primes. Diagnosed with "scleroderma," which is today called "sclerosis," his resolve hardened along with myriad symptoms of his disease, and he raged against the dying of his artistic light. Near the end he had trouble lifting his arms, trouble walking, bronchitis, arthritis, as if his struggle to speak the language of pure perception as an artist intensified the closer his fatal disease brought him to vision's closure.

In their new biographical survey, Paul Klee: Life and Work (Hatje Cantz, € 48.00), Christine Hopfengart and Michael Baumgartner liken Klee's productivity to Picasso's late flourish. "Klee's creative intensity was wrung from his illness, and represented the tangible result of his persistent will to live," they write. "Like Picasso, whose artistic activity increased in a final surge, Klee too worked ceaselessly against the clock, and his drive to visually express himself grew steadily until shortly before his death." He wouldn't let the blank canvas have its way with him.

From 1937 to 1940, when he died, Klee created hundreds of works -- mixed media paintings, watercolors, drawings -- gradually increasing, after a year away from work to deal with newly diagnosed illness, from 489 works in 1937 to 1253 works in 1939. While most of these works were drawings, the "impressive" lot included, "Revolution of the Viaduct," thought to be a middle finger salute to Hitler and his miens; "Harmonized Region," a black and white interweaving of shades reminiscent of his early fugal period; "Conch-Still Life II," a delightful rendering of his surrealist pseudo-symbolism; and, his final expressionist painting, "Death and Fire."

Paul Klee is in many ways a typical survey of the artist, the authors scrupulously careful to avoid the pitfall of veering off into culture wars or politics. These days, we might hold that against the writers, but I myself was happy enough just to keep it a straightforward narrative of a man's life as an artist and eschew the distractions. The result is a deliberate focus on Klee's artistic development -- one which is quite interesting in the richness of his choices growing up, as well as the unusual influences that helped him work his art.

One of the amazing things about Klee's life, which the authors spend some time exploring and cross-referencing throughout the text, is the fact that he was a "skilled" violinist who, along with his wife Lily, an excellent pianist, regularly played in chamber ensembles and sought out orchestral gatherings. This was such an important feature that Hopfengart and Baumgartner include in the volume a painting of Klee playing violin, painted by Alexandra Korsakoff, a Russian emigre friend. He wrote in his diary,

As time passes I become more and more afraid of my growing love of music. I don't understand myself. I play solo sonatas by Bach: next to them what is Böcklin? It makes me smile. [p.14]

Related Topic(s): Artistic; Artists; Biography; Book Reviews; Culture; Drawing; Music; Nazis; Painting; Picasso; (more...) Poems; Surrealism; Teaching; Thinking; Time; Work, Add Tags  (less...)
Add to My Group(s)
Go To Commenting
The views expressed herein are the sole responsibility of the author and do not necessarily reflect those of this website or its editors.