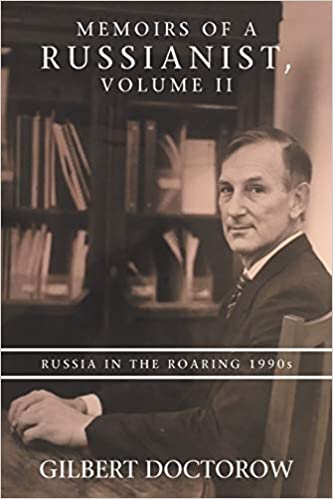 Russia analyst and author Gilbert Doctorow has written a 2-volume memoir that takes the reader on a journey through his years as a Russia specialist. Starting with college and graduate work in Russian history at two Ivy League universities followed by decades of business management and consulting work, Doctorow provides a rare peek into the last days of the Soviet Union and the chaotic transition of the Russian Federation as someone who had a front-row seat. In the process, he dispels many of the myths that persist among widely-published journalists and Russia watchers today.

Both volumes are structured in a unique manner in that roughly the first half to two-thirds sets out the narrative while the remainder consists of the reproduction of a variety of documents to buttress Doctorow's account. These include excerpts of diary entries and correspondence with friends and family members during the relevant periods, as well as summaries of newspaper articles noted as significant at the time.

The first volume primarily covers Doctorow's early life and education. Born and raised in the U.S., Doctorow's grandparents were Russian emigres. His family background fostered a curiosity about Russia and he studied the country and its history at both Harvard and Columbia, including taking courses under the notorious Richard Pipes. Ironically, Doctorow viewed most of the Ivy League professors he encountered as "closed-minded" and "complacent," but he did at least find Pipes to be a colorful lecturer.

Upon graduating with a PhD, Doctorow prepared to be a professor himself but fled the profession after suffering "stage fright" in front of a classroom. Having traveled through Western and Eastern Europe on a fellowship, Doctorow received another fellowship that enabled him to study for a year at the state archives in Leningrad and Moscow from 1971-72. It was during this time that he met Larisa, a young Russian writer who would become his wife.

To earn a living, Doctorow got a consultancy job for U.S. companies with major industrial projects at the time in the Soviet Union. Thus began a career that would span through the 1990s working in management and consultancy positions for companies, mostly in the food-processing, liquor and agribusiness industries, throughout Europe and Russia. In addition to the business savvy that he would acquire as he went, his knowledge of the language and culture of Russia would serve him well professionally.

Some of the unique obstacles to doing business in general in the Soviet Union included the Jackson-Vanik law, which made commerce dependent upon Jewish emigration levels, constant surveillance, "random assaults" on foreigners, bureaucratic conflicts and control, lack of incentive for innovation and focus on quantity rather than quality in production goals. More specifically, problems in the food-processing industry that Doctorow spent a significant amount of time in included poor availability of packaging and refrigeration. This was despite the fact that Soviet leaders genuinely seemed interested in improving the quality and variety of food products for their citizenry.

From 1989 to 1993, Doctorow helped in the building up of UPS in Russia. The transportation logistics were greatly improved by the fall of the Berlin Wall not long after he started. As someone on the ground during this important period of transition to a privatized market economy, Doctorow observed very low levels of competence and ethics in the business community in general. He specifically mentions the challenge of constantly changing customs and regulations, which affected delivery times, that were an integral aspect of success for UPS. This type of problem was a recurring theme during Doctorow's business life in 1990s Russia:

"One hears of the mafia and extortion, the racket. One hears of the rapacious tax authorities. These are indeed frightening aspects of the Russian business predicament. But what is more general and more dangerous is the entire legal environment, the welter of contradictory laws, administrative circulars, etc. which makes for a totally confusing situation, where one's rights and obligations are unclear and where only one thing is certain: you are always in violation of one or another regulation." (pp. 178-179)

Though admittedly a learning curve in how to conduct business efficiently and honestly was to be expected in a country that had little history of it, these challenges were part of a much larger issue with corruption, major societal instability, and the exploitative mentality of western political leaders and business advisers:

"Those political commentators today who speak with such nostalgia about the democratic Russia of Boris Yeltsin as contrasted with today's supposedly authoritarian Russia are either shamefully ignorant of the realities of daily life back then or are simply vile propagandists for whom the truth has no relevance to their 'end justifies the means' mindset." (p. x)

Doctorow recounts many episodes that characterize the violence of this era in Russia. One is a gangland murder on the steps of the Hotel Ukraina in which Doctorow was staying at the time as he often did during a period in Moscow. Around the same time, a pub up the street was bombed because the owner did not pay protection money.

Doctorow also discusses the 1996 murder of Paul Tatum, an American hotelier who had a stake in the Moscow Radisson and was gunned down outside the building. His naked body laid across the medical examiner's table was broadcast on television news that evening in what many interpreted as a part warning/part gloating spectacle. It was one murder in a larger pattern of business-contract disputes being regularly resolved via deadly violence and whether one was a Russian or a westerner didn't matter. In this case, Doctorow suggests the perpetrators acted "in the spirit of national assertiveness encouraged by then Moscow mayor [and later candidate as a possible successor to Yeltsin] Yuri Luzhkov." (p. xiii)

While attending a dinner party to celebrate Victory Day with his in-laws in St. Petersburg in 1995, Doctorow relayed one relative's experience serving in Chechnya as a pathologist for the military. His job was to examine and identify the war dead amid the utter devastation of the capital of Grozny. After completing his service, he and those he served with were all treated for "shell shock" before release. This young man told Doctorow and the other guests that the war seemed to have been needlessly prolonged for political reasons.

There was also the desperate poverty contrasted with the nouveaux-riche elites. A diary entry from mid-January of 1994 noted during a visit to Moscow that western newspapers were celebrating the accord between Yeltsin and Clinton while prices for food and other necessities continued to increase - at that point by 30% within two months. Filthy streets lined with beggars and desperate Russians selling items that no one wanted were observed, along with a "malevolence" that permeated the political atmosphere.

This atmosphere was too often exacerbated by the kind of westerner drawn to '90s Russia who, needless to say, wasn't going to put in the hard work of building a business infrastructure that would provide stability and integrity. According to Doctorow, they were typically young men looking for sexual adventure and/or were recent graduates in Slavic language/literature with the intention of going back home to teach, but ended up drawn into lucrative business opportunities without having the relevant skills or experience.

Related Topic(s): Book Reviews; History; Memoir; Russia; Yeltsin, Add Tags
Add to My Group(s)
Go To Commenting
The views expressed herein are the sole responsibility of the author and do not necessarily reflect those of this website or its editors.