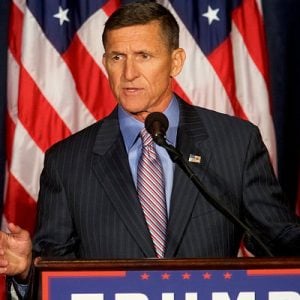 The Trump-Russia scandal has so far resided in the territory between smoke and fire. Donald Trump associates have reportedly been investigated for interactions with Russia, but the FBI has not released information on these contacts. Trump has pushed an America First policy, but he has curiously denied or downplayed the US intelligence conclusion that Vladimir Putin mounted an extensive covert campaign to subvert the 2016 election to benefit Trump and instead has cultivated an odd bromance with the Russian autocrat. A series of memos written by a former counterintelligence officer contained allegations that Russian intelligence had spent years cultivating or co-opting Trump and gathering compromising information on him and that the Trump camp had colluded with Russians, but the specifics have not been confirmed.

Yet now one piece of the Trump-Russia puzzle has been clearly depicted: Trump's national security adviser was in cahoots with Russia to undermine the US government's effort to punish Moscow for hacking the US election -- and he apparently lied about it. If Trump does not fire him -- and if Washington's political-media complex (including Republicans) does not go ballistic over this revelation -- then the Putinization of America has taken another big step forward.

David Corn is  Mother Jones ' Washington bureau chief. For more of his stories,  click here . He's also  on  Twitter  and  Facebook .  RSS  |  TWITTER  David is (more...)
Related Topic(s): Dishonesty; National Security Adviser; Trump Cabinet; Vladimir Putin, Add Tags
Add to My Group(s)
Go To Commenting
The views expressed herein are the sole responsibility of the author and do not necessarily reflect those of this website or its editors.