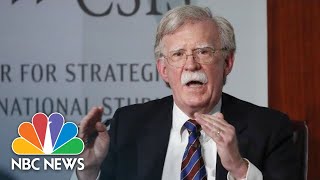 John Bolton: 'Every Day That Goes By Makes North Korea A More Dangerous Country' | NBC News When asked if he thought North Korea was not giving up enough, Bolton says, .I don't think the North Koreans will ever voluntarily give up enough, because ...
(Image by YouTube, Channel: NBC News)   Details   DMCA

Somehow one knew Trump's recently departed national security adviser John Bolton wouldn't just fade into the sunset once the "Donald" had enough of the fanatical Bolton's urge to start another war say in Iran or Venezuela.

No. Bolton was last seen pontificating this past Monday at the Center for Strategic and International Studies blasting Trump for "seeking a middle ground in North Korea insisting its leader Kim Jong-un "couldn't be trusted" and a military intervention against the North was necessary.

Incredibly the US corporate MSM lapped it up embracing Bolton as some new found friend with the Washington Post stating, "John Bolton has finally spoken, and he put a big warning sign about Trump and North Korea. The big question with Bolton is how far he's willing to go-and whether he might be a key witness in the Democrat's impeachment inquiry over Ukraine".

The New York Times-not to be outdone-quoted Bolton with, "Every day that goes by makes North Korea a more dangerous country". This after the Times last year ripped "Bolton's illegal war plans for North Korea".

What's changed in the MSM new found embrace of Bolton? He might provide some useful tidbits-dirt- in the Dem's House impeachment inquiry of Trump's phone call to Ukraine President Volodymyr Zelensky in July-the basis for the inquiry- and who better than Bolton to provide some lusty details on the "Donald".

C'mon, the media's embracing a warmonger like Bolton? What's the saying, "The enemy of my enemy is now my friend" is the best way to put it. They and the Dems ONLY interest is derailing Trump any way possible.

A week ago House Speaker Nancy Pelosi claimed Russia was involved in the Trump-Zelensky phone call scandal which Russian Foreign Minister Sergei Lavrov described as "obvious paranoia'. Russia's been accused of all the deadly sins, and then some". Leave it to the Russian statesman to call it as it is.

Meanwhile the "Trumpster" has excoriated the Dems and its sinister media tweeting, "I am coming to the conclusion that what is taking place is not an impeachment, it is a COUP, intended to take away the power of the people".

This is what transpires as politics in "official" Washington. Now we'll have to suffer endless hearings in the House impeachment inquiry over Trump's phone call coupled with his tweets describing it all as a coup to bring him down.

Who needs Barnum and Bailey's circus-which is now defunct. We have a ready replacement.

Retired. The author of "DECEIT AND EXCESS IN AMERICA, HOW THE MONEYED INTERESTS HAVE STOLEN AMERICA AND HOW WE CAN GET IT BACK", Authorhouse, 2009
Related Topic(s): Democrats; Hearings; Impeachment; Inquiry; John Bolton; Korea; Trump, Add Tags
Add to My Group(s)
Go To Commenting
The views expressed herein are the sole responsibility of the author and do not necessarily reflect those of this website or its editors.