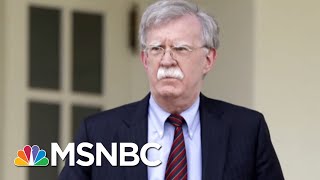 Trump Fires National Security Adviser John Bolton - The Day That Was | MSNBC John Bolton is the latest top national security official who has been forced out after clashing with President Trump. Trump said Tuesday that he had fired national ...
(Image by YouTube, Channel: MSNBC)   Details   DMCA

Geopolitically, good news is rarely heard these days. Yet yesterday qualifies as one of those days.

The news Trump's national security advisor John Bolton was finally gone from the scene. Does it matter whether Bolton resigned as he said or given the axe as Trump tweeted? No. All that matters Bolton is gone.

A recent report-unconfirmed-had Bolton not invited to attend a national security meeting in the White House. Which if true was a tell-tale sign his days were numbered.

Since April last year when Trump named him national security advisor there's hardly been a day where news of Bolton brought any sense of relief that some new US misadventure advocated by Bolton was about to happen.

Iran, Syria, Venezuela, North Korea, Russia, China, Cuba, Nicaragua, essentially any country that refused to submit to US hegemony was fair game for the psychopathic Bolton's wrath. Even Turkey for its purchase of Russia's S-400 ABM system and Italy meeting with Chinese President Xi and joining in his BRI, Belt and Road Initiative didn't escape Bolton's ire.

Then there was him glad handing and cavorting with the despicable Israeli Prime Minister Benjamin Netanyahu which was particularly galling with the latter's daily condemnation of Iran and giving his IDF, Israeli Defense Force a "free hand" in dealing with the Palestinian's in Gaza, the border with Lebanon or sending missiles into Syria. Then yesterday, days before Israel's election, Netanyahu announcing one of his first acts as new PM would be Israel's annexing the Jordan Valley, the lightly populated area of the West Bank.

But let's be clear. Bolton's departure doesn't signal the Trump administration all of a sudden becoming dovish. Hardly.

The "Trumpster" also announced yesterday he's breaking off peace talks with the Taliban in Afghanistan so the US longest war will continue indefinitely. What's guaranteed is more American soldiers will die in Afghanistan. And for what?

Trump is so deficient in history he's obviously unaware Afghanistan represents the "graveyard of invaders" with the Soviets leaving in 1989 and earlier the British finally signing a peace treaty in 1919.

Of course it's not just Trump's historical ignorance but the entire exceptional arrogance that prevails in "official" Washington, the think-tanks around the Beltway plus the assorted "experts" found on the corporate MSM.

They've forgotten the US left Vietnam in 1973 in disgrace losing that war which should never have been fought, but left 57,000 GI's dead and millions of Vietnamese slaughtered. All of it escalated over the false flag "Gulf of Tonkin incident" perpetrated by the CIA in 1965.

The same can be said for "Dubya" Bush's invasion of Iraq in March 2003 over Saddam Hussein's alleged WMD plus the more far-fetched him being allied with Osama bin Laden, the alleged mastermind of 9/11. Saddam is long gone, Iraq's infrastructure in ruins while it's Shiite led government is solidly allied with Shiite Iran.

Getting back to Afghanistan, its indigenous people, not just those aligned with the Taliban know they can out wait any invader who will eventually leave. They are not about to accept being the quisling of any foreign invader.

Something the US will eventually find out.

As for Bolton he'll just be another insignificant footnote in the dustbin of history.

Retired. The author of "DECEIT AND EXCESS IN AMERICA, HOW THE MONEYED INTERESTS HAVE STOLEN AMERICA AND HOW WE CAN GET IT BACK", Authorhouse, 2009
Related Topic(s): John Bolton; Trump, Add Tags
Add to My Group(s)
Go To Commenting
The views expressed herein are the sole responsibility of the author and do not necessarily reflect those of this website or its editors.