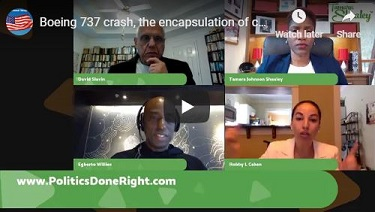 The title of this post is a conflation to make a more significant point. And that is what we did in the segment where I participated in on Tamara for Georgia.

I joined near the end as is customary. The panel had a healthy discussion on several topics. But the discourse that drew my attention was the Boeing 737 MAX crash.

A New York Times article made it clear that Boeing sold safety features on the 737 MAX a la carte.

As the pilots of the doomed Boeing jets in Ethiopia and Indonesia fought to control their planes, they lacked two notable safety features in their cockpits. One reason: Boeing charged extra for them. For Boeing and other aircraft manufacturers, the practice of charging to upgrade a standard plane can be lucrative. Top airlines around the world must pay handsomely to have the jets they order fitted with customized add-ons.

Sometimes these optional features involve aesthetics or comfort, like premium seating, fancy lighting or extra bathrooms. But other features involve communication, navigation or safety systems, and are more fundamental to the plane's operations. Many airlines, especially low-cost carriers like Indonesia's Lion Air, have opted not to buy them and regulators don't require them.

Boeing sold safety like any other product. A safety feature that ensures a piece of software doesn't fly a plane into the ocean or ground should not be optional especially when the cost is virtually nothing relative to the overall price of the aircraft. So why did Boeing charge for this safety feature?

The angle of attack indicator will remain an option that airlines can buy. Neither feature was mandated by the Federal Aviation Administration. All 737 Max jets have been grounded.

"They're critical, and cost almost nothing for the airlines to install," said Bjorn Fehrm, an analyst at the aviation consultancy Leeham. "Boeing charges for them because it can. But they're vital for safety."

Ultimately Boeing charges for safety because, as I mentioned in a recent blog post those who have pricing power controls every aspect of our lives barring government, we-the-people intervention. It was no different for the Boeing 737 MAX.

Using the Boeing 737 MAX for a bigger message.

Early into my discourse I immediately drew the correlation between worse of Capitalism which turns everything into a product or commodity. I then expanded the discussion to include the interview I had on Politics Done Right with Economist, Dr. Richard Wolff, about Capitalism.

Dr. Wolff pointed out that our economic systems were awry for some time. He explained the similarities between Capitalism, Feudalism, and Slavery. Please listen to the entire video in the post. We fused some seemingly disparate concepts to tell a compelling economic story that affects us all.

Related Topic(s): Boeing; Capitalism; Slavery, Add Tags
Add to My Group(s)
Go To Commenting
The views expressed herein are the sole responsibility of the author and do not necessarily reflect those of this website or its editors.