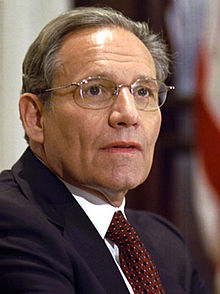 Bob Woodward.
(Image by Wikipedia (commons.wikimedia.org), Author: Jim Wallace (Smithsonian Institution))   Details   Source   DMCA
uly 2016, a shameless and obnoxious presidential candidate bragged, "Nobody knows the system better than me, which is why I alone can fix it." For sheer delusional bombast, that assertion and promise ranked right up there with his, "I'll build the wall and Mexico's going to pay for it"

But what else, then, could he do but attempt to mesmerize his witless, hate-filled audience with a loud-mouthed, carnival-barking con? After all, he was a sexual predator, cowardly draft-dodging bully, failed businessman, and reality TV phony with a decades-long rap sheet for being a boorish, self-aggrandizing, ignorant, insecure, unfaithful, narcissistic, vulgar, racist, sexist, homophobic, xenophobic, short-tempered, undisciplined, mendacious, corrupt, insulting, and media-exploiting crybaby.

But, as readers of Bob Woodward's new book, Rage, quickly learn, Trump responded to the threat posed by the coronavirus pandemic, not by attempting to fulfill his "I alone can fix it" promise, but by doing too little too late, by lying to Americans in order to downplay how serious the threat actually was, and by blaming virtually everybody and everything under the sun - including China, President Obama, states run by Democratic governors, and the tests (yes, tests!) - for what literally became America's "Trump pandemic."

Trump's willful mishandling of the coronavirus is the greatest presidential dereliction of duty in American history. The numbers demonstrating his failure are stark. Although the United States has only 4.2% of the world's population, as of September 20, 2020, it had registered more than 22% of the world's cases and 21% of its deaths (6,863,854 and 200,000 respectively) -- far more than any other country in the world. By comparison, the European Union has approximately 10.2% of the world's population, but as of that same date, had registered just 9% of its cases and 19% of its deaths (2,841,191 and 186,107 respectively).

The rest of the world is quite aware of Trump's debacle. The title of a September 15, 2020, Pew Research poll says it all: "U.S. Image Plummets Internationally as Most Say Country Has Handled Coronavirus Badly" Its subtitle reads, "Ratings for Trump remain poor"

Thanks to Bob Woodward's reporting in R age, we know that, "during the Top Secret President's Daily Brief the afternoon of Tuesday, January 28, 2020," national security adviser Robert O'Brien told Trump that "the mysterious pneumonia-like outbreak in China....will be the biggest national security threat you face in your presidency."

And, thanks to Woodward's tape recordings of his interviews with President Trump, we now have Trump's own words about the coronavirus. On February 7, 2020, Trump told Woodward: "It's also more deadly than even your strenuous flus.... This is deadly stuff."

Yet, on February 25th, when the Center for Disease Control's Dr. Nancy Messonnier "issued a stark warning" - saying, "Schools might have to close, conferences might be curtailed, and businesses may have to have employees work from home. 'The disruption to everyday life may be severe'" - Trump threatened to fire her.

The very next day, Trump held a news conference in which he downplayed the threat with a lie. "This is a flu. This is like a flu." Worse, on February 28th, Trump accused the Democrats of politicizing the virus. Astoundingly, in light of Robert O'Brien's warning and what he already admitted to Woodward, Trump had the gall to assert, "This is their new hoax."

In late March, Trump repeated his lie that the virus is like the flu, adding, "But we've never closed down the country for the flu.., So you say to yourself, 'What is this all about?' "

On Woodward's tape of March 19th, Trump said the following about the coronavirus threat: "I wanted to always play it down"I still like playing it down, because I don't want to create a panic." (But, at a town hall in Philadelphia on September 15, 2020, liar Trump flip-flopped; asserting that he "up-played" the threat.)

Judging by other evidence, however, Trump probably was lying about why he played it down. Consider, for example, his eagerness to create a panic, on the eve of the 2018 mid-term elections, by hyping the threat posed by so-called "caravans" coming to our southern border, caravans that included "criminals and Middle Easterners." Or consider his eagerness to panic "housewives" in the suburbs with the threat of lawless blacks invading their neighborhoods -- coincidently just months before the 2020 presidential election.

In reality, Trump thrives on creating fear and panic. Simply recall Trump's own words uttered on March 31, 2016: "Real power is - I don't even want to use the word - fear."

Rather than so-called worry about the public, for whom Trump has contempt (even calling his own followers "disgusting," during a coronavirus task force meeting), Trump probably downplayed the virus so as to "not draw attention to it." As the Washington Post's Ashley Parker and Philip Rucker have concluded, Trump's "inability to wholly address the crisis is due to," (1) "his almost pathological unwillingness to admit error," (2) "a positive feedback loop of overly rosy assessments and data from advisers and Fox News," and (3) "a penchant for magical thinking" (Ashley Parker and Philip Rucker, "One question still dogs Trump: Why not try harder to solve the coronavirus crisis?" Washington Post, July 27, 2020).

Trump sought to draw attention away from the emerging contagion in order to avoid spooking the stock market, the supposed linchpin to the strong economy that he believed would virtually guarantee his reelection. Thus, on February 10th, according to Woodward, "Trump said publicly three times"that the virus would go away on its own." Moreover, Trump displayed his magical thinking when he said, "When it gets a little warmer, it miraculously goes away."

Given Trump's magical thinking, why draw attention to something that "miraculously goes away?" Unfortunately, Trump's failure to take significant action to contain the virus that spring also appears to have been motivated by that same magical thinking; his belief that, "miraculously," the virus was going to go away. Consequently, except for his highly porous China travel ban announced on January 31st - about which he repeatedly bragged -- and very belated restrictions on travelers arriving from Europe (only announced on March 11th), the man who claimed, "I alone can fix it," in reality, attempted to fix very little. No early ramping up of the production of masks, PPE, ventilators, or tests. No early shutdown of the country, when a two-week earlier shutdown would have saved more than 50,000 lives.

Walter C. Uhler is an independent scholar and freelance writer whose work has been published in numerous publications, including The Nation, the Bulletin of the Atomic Scientists, the Journal of Military History, the Moscow Times and the San (more...)
Related Topic(s): Book Reviews; Pandemic; Thoreau; Trump And Kim Round Two Summit; Trump Anger; Trump Attacks Democrats; Trump Attacks Impeachment; Trump Attacks Joe Biden; Trump Attacks Obama; Trump Con; (more...) Trump Praises Kim Jung-un; Trump Rally; Trump Re-election; Trump The Fascist, Add Tags  (less...)
Add to My Group(s)
Go To Commenting
The views expressed herein are the sole responsibility of the author and do not necessarily reflect those of this website or its editors.