Joan Brunwasser: I just finished reading your recent piece, Defunding 'Justified' Murder. Many of our readers have not yet had the opportunity to read it so can you get us started, please? What precipitated this particular article?

Bob Koehler: Hi, Joan! Well, the whole world is changing. An awareness, an outrage, is spreading across the planet. I've been writing for the last six weeks about murder after murder after murder, virtually all of them initially "justified," of black men or women at the hands (or the knee) of a police officer in the midst of some routine or minor matter. This has been happening forever, but, thanks to videocams, police no longer have the impunity to tell the world why they had no choice but to do what they did.

Suddenly, in the midst of a pandemic, a racist social structure can no longer be publicly tolerated. I want to add my column to the collective voices across the planet calling for change -- calling for a recognition of Europe's racist, colonial history, atonement and absolute rethinking about the nature of social order. That's where the concept "defunding" comes in. It means that the nation and maybe the entire world will struggle to rethink how we maintain social order and no longer finance armies of occupation to do so. Militarized policing, with a foundation in racism, is not the way. Not anymore!

JB: Let's talk about what defunding is, beyond a reaction, suddenly shared, to the endless violence against civilians. The concept does scare a lot of people. What does it mean concretely and, conversely, what doesn't it mean?I'm assuming proponents are not advocating for a descent into anarchy, correct?

BK: The essential meaning of "defunding," as I understand it, begins with the idea of "rethinking" -- at many levels -- the requirements of social order. At this stage of American society, we've drifted into domestic militarism in a very unquestioned way. "Call the police" is the reaction to almost every problem. Police departments across the country are lavishly funded. Their budgets are about a third of the budgets of many, perhaps most, American cities. Their budgets are enormous, and much of the money goes to military equipment. Meanwhile, virtually all other social programs -- health care, education, mental health, housing, on and on and on -- are underfunded. Money is generally unavailable for many crucial programs This is partly due to a widespread prejudice that militarism keeps us safe and other spending just makes people lazy and dependent on government (e.g., "welfare queens").

The videos showing blatant police brutality, often resulting in the death of a man or woman of color, have shattered that prejudice. It's not just an angry public. Many political leaders also see the need for change: the need to divert government spending (at all levels of government) away from policing to many underfunded but crucial programs. People are calling for a complete social reorganization. What will it look like? There are many, many visions out there. The national conversation is just beginning. 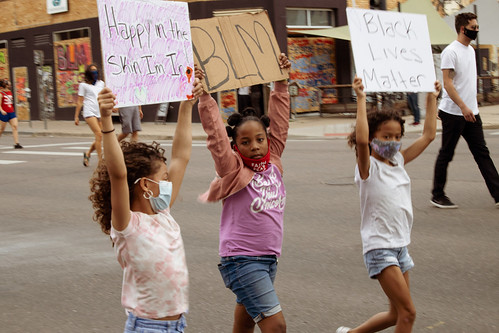 JB: I imagine that the police see the cries for defunding as an attack on them and their institution. I'd like to talk about that. But I want to discuss something else first. Police are clearly afraid of the public, at least some segments of it - particularly male teens and adults of color. Why else would so many routine interactions turn into so many black corpses with multiple bullets in their backs? What role has the militarization mindset and outfitting of our police forces contributed to that? And has it made it more likely for people of color to die at the hands of the police? Or are we just now suddenly, finally, paying attention?

BK: This question opens up several crucial issues, which are, of course related. Here's a lethal combination for you: guns and racism! Power corrupts, and absolute power corrupts absolutely. Most police should be disarmed. When you're armed, your sense of fear and danger intensify enormously. If you are able to kill, the other guy could too, or so you believe. Being armed creates this mindset. Most policing is on a hair-trigger. Add in the racism -- both individual and social -- and what you have in America are armed police who are geared to think the worst of black people. Add in the fact that police have the authority -- the power -- to order the general public to do what they're told. This sort of power could be used solely to stop harm from occurring, but that's not how things work. Power without accountability leads to enormous abuse. Mix in the racism and what you have is "USA! USA!"

JB: You've clearly spelled out a formula for disaster. How much have social media and the proliferation of cell phones, and more relevant here, phone cameras, played a part here? And, on that note, there have been numerous reports, in recent months and years, of citizens wielding camera phones being told to stop, having their phones confiscated and, in some cases, destroyed. Is this even legal?

BK: No way is that legal! The cellphone camera is the trigger of all this change. Who could have guessed? But suddenly the public has, in large measure, awakened. The evidence of police brutality -- and police lying about what actually happened -- has shifted the social paradigm. But if a status-quo racism reclaims power, filming police actions could easily become illegal. Thus, problem solved. No more evidence! The worst of who we are is always present, always trying to prevail. That's why this is a much bigger issue than us vs. them: good guys vs. the police. That's no different from police vs. the bad guys -- our long-time status quo. We need to step into a far bigger, far more complex understanding of what constitutes social order. There are no "bad guys." We're all in this together, and we have to solve our problems together. I call it participatory evolution.

JB: I like the sound of that, Bob. The devil is in those pesky details. How do we evolve to the point where Officer Friendly is not an oxymoron? How do we bring that potent change about both quickly enough to stop the killings and slowly enough not to freak out those who will have to hand over power and/or handle their own power in a very different way?

BK: Those are serious and complicated questions with no easy answers. I would say thinking about all this begins thus: We already have the power! It's not that we're trying to take power away from tough-guy cops, who will then scream bloody murder. We have the power right now and we just have to claim it. That's exactly what's happening with the global uprising we're witnessing. Suddenly, things have coalesced. A large segment of the population is coming together and demanding change. This movement includes police -- at least some of them, who know full well that the current system is broken.

Changing our approach to social order doesn't mean disempowering police but, in fact, re-empowering them. Carrying a gun and being tough isn't power, it's swagger. This behavior keeps no one safe, including the police themselves. The "Officer Friendly" concept is problematic, in that it illustrates one of the biggest obstacles to real change: cynicism. Suggest something other than armed authority and the cynics start clawing at you. "Oh gee, let's all love each other, la di da!" Cynicism ignites counter-cynicism. We have to transcend that and continue pushing for real change, or what I would call, in defiance of the cynics, loving change.

Related Topic(s): Citizens; Connecting; Interviews; Killing; Militarized Police Militarization; Police; Power; Racism; Restorative, Add Tags
Add to My Group(s)
Go To Commenting
The views expressed herein are the sole responsibility of the author and do not necessarily reflect those of this website or its editors.