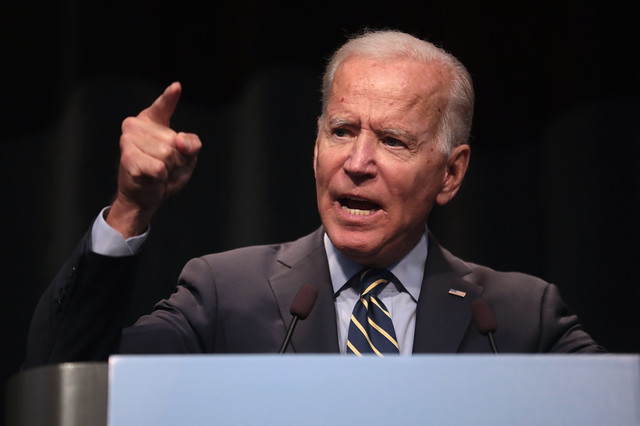 Joe Biden's manifold and manifest vulnerabilities in a contest with the obviously addled but still media-savvy Donald Trump are often offered by supporters of Bernie Sanders as a reason to back their man as the more likely winner. "Biden will lose," they say; "if you really want to defeat Trump, then Sanders is the only one who can do it."

There are strong arguments for that case, not least the fact that Sanders has consistently, since 2015, outdone every Democrat in head-to-head polls against Trump. Certainly, I would rather see Sanders as the nominee. And certainly, I have been railing against Biden in print and on line for more than 20 years, excoriating him as a corporate bag-man who has played a key role in inflicting enormous suffering on ordinary Americans with his draconian bankruptcy and crime bill obsessions, not to mention the multitudes of innocent people around the world who have died from the hawkish warmongering policies he has unfailingly supported.

But while I sorely hate undercutting any argument against Biden, I do believe it is possible for old Joe to defeat Trump. Here's how it's likely to play out, if Biden is the nominee.

Both he and Trump will lumber around the country for months, dribbling out word salad to adoring supporters who don't have the slightest interest in what the doddering old men at the rostrum are saying. Both will spout inane and barely coherent platitudes without offering anything remotely resembling actual policies or programs or solutions to the myriad of dire crises we face. Both will have their content-less, incoherent ramblings presented as cogent "debating points" and "policy positions" suitable for "deep analysis" by the shallow savants of the national press. There will be various gaffes, outrages, mini-scandals, along with a crazy quilt of polling numbers changing wildly by the day, even by the hour.

And none of it will matter. America's electoral politics are so far removed from the actual reality of how power is really exercised in our society and from the actual state of degeneration our dying society is really in that it is nothing more than a badly rendered cartoon, a medicine show with clowns and con-men, a white noise machine howling down any genuine thought and feeling. It is, quite literally, sound and fury, signifying nothing: precisely because it no longer has any connection to the true operations of power and the reality of decay.

Trump recognized this first, but the Democrats have caught up. You don't have to have any real policies. You don't have to offer any real hope. You don't even have to make any sense. Most people are so battered by the decay and tormented by the white noise that all they can do is grab hold of some emblematic figure offered to them by the system and project all their hopes and dreams and fears and desires onto them. Even if the offered figures are a pair of doddering, blubbering old men, lumbering around the country dribbling out word salad.

Sanders' defeat in Michigan will for many signal the end, or the beginning of the end, of his nomination quest. And in the wake of that defeat, Sanders supporters will very rightly point out DNC rigging and interference in the campaign, the astonishing series of "problems" with every vote count that might benefit him, the outsized role that Big Money played (exemplified by new Biden supporter Mike Bloomberg and the Wall Street tycoons that Biden is floating as possible cabinet members), and, perhaps most crucial of all, the fact that Sanders has been relentlessly, ceaselessly, mercilessly demonized and vilified by the media and by the "liberal" media most of all.

For it's a fact that most Americans who get what little political news they care to imbibe from casual glances at the media will never have heard a single report about Sanders that wasn't negative in some respect, or in all respects. Again, this goes double for casually liberal Democrats, who get their news and views from the NYT, MSNBC, NPR, CNN, CBS, ABC, WP, etc. There, Sanders is portrayed either as the horned spawn of Chavez and Che, come to ravage your 401k and execute millionaires in Central Park or else as a unicorn-chasing fantasist with no sense of gritty, savvy realpolitik, which dictates that we must always hew slavishly to the centrist mean. (Whatever that happens to be in any given year although, whatever it is, it is always to the right of what it was before.)

Sanders has had to wage his campaign with the entire weight of the bipartisan power structure against him: the Democratic Party, the Republican Party, Wall Street, the Pentagon, the "security organs," the national media across the board. The vote counts in caucuses and primaries are obviously being obfuscated or, when all else fails, simply left uncounted in large numbers, as in Texas and California.

But if and when the Sanders' campaign is subsequently derailed down the road, I no longer think it can be laid entirely at the door of the conniving players in the power structure. The lion's share, perhaps but there seems to be something else in the air of Campaign 2020. (Aside from Covid-19.) I think, perhaps, that we have come to such a crisis point on so many fronts that things are simply too overwhelming for most people to process, much less deal with, in any realistic way. Some strange combination of fatalism and magical thinking seems to have taken hold of large swathes of the electorate.

There seems to be the feeling that we can't really do anything at all about the problems that are bearing down on us like a runaway train climate disruption and all its ever-rippling repercussions; the rise of hyper-powerful rich elites manipulating our increasingly hollowed-out institutions for their own benefit; the economic demise of industry after industry, region after region, community after community; the endless wars, covert and overt, with their gargantuan corruption and pointless cycles of violence; the healthcare atrocities that leave millions of people literally begging on the internet to obtain even the barest minimum of medical help, and so on. In the face of all this, many people long to embrace some figure or another who promises us a return to the "status quo": either some mythologized post-war era when America was "great," or just back to the Obama years, when things were "normal."

Overwhelmed, battered, beset, anxiety-ridden, suffering, confused, many people don't want to hear that hard work and big changes will be necessary if we are to have a chance for things to get better. They just want to latch on to something that will let them feel if only for a moment that the anxiety can go away, that someone up there in the circles of power will take care of it for us.

This is not the wisest course when faced with overwhelming crises but it is an entirely natural and understandable one. When you couple this natural reaction to extremity with the aforementioned systematic effort to undermine and thwart the Sanders' campaign, then it's not surprising you end up with a blank screen like Joe Biden as your candidate.

And consider this: the blank screen of Donald Trump has now had four years in power, yet still those overwhelming, battering, confusing anxieties have not gone away; indeed, they've only multiplied. In this situation, it's entirely possible, perhaps even likely, that enough people will turn away from the torn screen of Trump and try a new cure for their anxiety.

Related Topic(s): Corruption; Crisis; Joe Biden; Media; Politics; Supporters; Trump, Add Tags
Add to My Group(s)
Go To Commenting
The views expressed herein are the sole responsibility of the author and do not necessarily reflect those of this website or its editors.