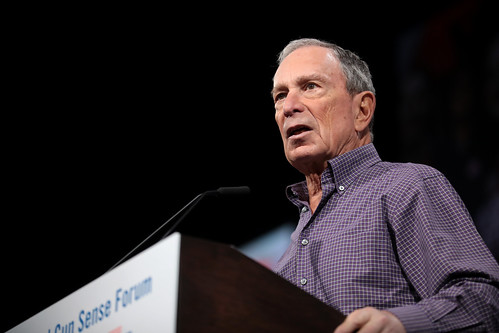 If Sanders wins the nomination, Michael Bloomberg and his filthy rich brethren are already preparing to fund and erect an alternative structure of dependable corporate governance.

While the other Democratic presidential hopefuls slog it out on the ground, shaking hands and begging money, Michael Bloomberg, the world's 8th richest man, is deploying his $61.9 billion fortune to methodically buy his way to ownership of the Democratic Party. Bloomberg's $800,000 donation to the Democratic National Committee (DNC) and state party organizations back in November bore fruit last week when the DNC dropped its rules requiring candidates to raise money from a minimum number of individual donors, plus reach a threshold in polling numbers, to qualify for the next televised debate, in Las Vegas. The decision was tailor-made for Bloomberg, the only candidate that does not accept outside donations. Instead, Bloomberg turns the golden spigot in the other direction, converting opponents and critics into boosters and allies a cash-cooperation strategy that made New York City a global Mecca for his fellow oligarchs, and for hyper-gentrification, during his three terms as mayor (two of them as a Republican).

Having saturated the airwaves of targeted states with advertising, the nation's most electorally-oriented oligarch should have no problem polling high enough to qualify for the next debate. With Biden stumbling into the basement in Iowa's app-struck (more likely, DNC/spook-struck) primary caucuses, Bloomberg is now the Great White Hope to beat back Bernie Sanders' and Elizabeth Warren's soak-the-rich hordes a task unfit for the Black-averse small town mayor, Pete Buttigieg.

Bloomberg has authorized his 2,000-strong field staff the best that money can buy to double their spending in post-Iowa arenas. He has spent almost twice that much around $200 million on advertising, and tens of millions more in building a campaign infrastructure and buying endorsements from a host of Black political prostitutes, including Chicago Rep. Bobby Rush, Washington DC mayor Muriel Bowser and San Francisco mayor London Breed. Indeed, Bloomberg's billions have bought him more mayoral endorsements in top 100 cities than any other candidate.

This is how you buy the Democrats, who are actually much more of a brand name than a political party. Bloomberg had already made a down payment on the Democratic franchise, having lavished $100 million in subsidizing Democrats during the 2018 congressional races. He says he's ready to throw $1 billion into the pot to "defeat Trump" in 2020, no matter who wins the Democratic nomination. But that's a bunch of crap. Bloomberg is flashing his billions, building his own infrastructure, and suborning the DNC in order to insure that his oligarchic class does not loose control of the only reliable half of the duopoly that remained after takeover by the hopelessly unreliable Trump.

The ruling class can't rule unless it controls a reliable governing party. That means defeating Bernie Sanders and coming to an "understanding" with Elizabeth Warren. Otherwise, Bloomberg has positioned himself and his filthy rich cohorts to create an alternative party structure to resist the popular tide against never-ending austerity and war, the only plan that the Lords of Capital have for the future of the nation and the world.

For more than 40 years, the Democrats could be relied upon to help herd the Black, brown and working class masses into a Race to the Bottom, where they would compete with the super-exploited peoples of what used to be called the Third World the global toilers whose enforced precarity and desperation has birthed a demon-breed of billionaires. Bernie Sanders' campaign and, to a lesser degree, Elizabeth Warren's "plans" threaten to burst both the dams of austerity and the grotesquely bloated military budget bubble. With Sanders and Warren effectively running against the billionaires, Bloomberg has taken point position in defense of oligarchic rule. He has put his own money on the line, and is challenging his Midas-Touch peers to join him at the boardroom barricades. Their message is a perverse "No Pasaran" ("They shall not pass") to the poor and precarious not this election year, not ever.

The Democrats underwent a less dramatic billionaire's takeover back in 2004, when the party's biggest donors, including George Soros, forced a halt to hundreds of millions in election year payouts to the various constituent organizations of the Democrats' Black, brown and working class base. The Black political class was especially hard hit, since most Black community organizations had decades before folded their independent political tents and become extensions of the Democratic Party. When the billionaires decided, through their "527" political funding outfits, to make the Democrats more directly answerable to the ruling class, the $200 million in election year payments to "traditional" constituent groups like those gathered under the umbrella of the National Coalition on Black Civic Participation, abruptly ceased. Virtually the whole "civil rights" establishment was plunged into chaotic disarray longtime servants cut off from the master's budget, but still expected to tend to his political needs.

The Black Agenda Report's co-founders reported on the "crisis" in the pages of The Black Commentator. The late Black political scientist Dr. Ron Walters, writing for the aggrieved Black organizations, attempted to frame the issue in self-determinationist terms, arguing that the election-year subsidies should continue:

Needless to say, the billionaires won the argument, and the Black organizations ultimately accepted their new status as largely unpaid minions of a party controlled by white oligarchs a hierarchical standing (or kneeling) they continue to loyally occupy.

The Lords of Capital are once again preparing to exert direct managerial control over the party whose mission is to discipline and contain the many centrifugal political currents that might rebel against the late-capitalist austerity order to demand the social democratic entitlements enjoyed by the populations of most other rich nations. The corporate Democratic establishment is determined to sabotage the Bernie Sanders campaign by hook or crook. However, if they fail to contain the rebellion and Sanders wins the nomination, Michael Bloomberg and his filthy rich brethren are already preparing to fund and erect an alternative structure of dependable corporate governance.

Related Topic(s): Billionaires; Democratic Party; Democratic Sellout; Election; Michael Bloomberg; Tsunami, Add Tags
Add to My Group(s)
Go To Commenting
The views expressed herein are the sole responsibility of the author and do not necessarily reflect those of this website or its editors.