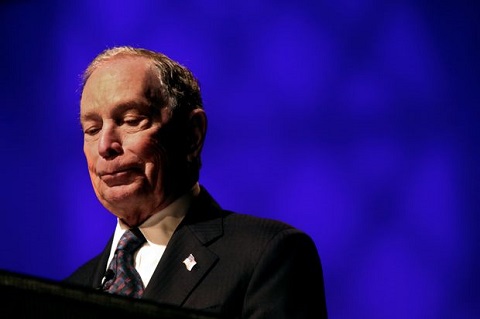 In 1999 he called me up and asked me to be his "date" at the annual White House Correspondents Dinner. I said,"Yes." When I got there he was with his other "date" Charlie Rose. Disgusting. Those two were peas in a pod. Two years later Bloomberg was Mayor. He took Rudy's "Stop and Frisk" program and put it on steroids. 12 long Bloomberg years of rounding up, apprehending and assaulting 5 million innocent black and brown men from 2001 to 2013. Yes, that's right: FIVE MILLION black and brown boys and young men (a number that just screams incomprehensible!) and THAT is why I beg everyone to shun Bloomberg in this election year.

In police states past and present, in order to make it easy for the police to identify the subhumans they seek to terrorize, the authorities require the hunted to carry ID papers, or wear a "scarlet letter" or have an identifying emblem sewn onto their clothes. None of this was needed in New York City. The mark of their status as "permanent suspect" was already on them their skin. It covered their whole body. It could not be removed. A permanent stain for the permanent suspects. It made it so easy to grab them and nail them and instill in them a sick fear that they were forced to carry with them every time they stepped outside their homes. That, of course, was the true intention of Bloomberg & Co. let a race of people be reminded on a daily basis who's in charge, who's to bow their heads and obey the orders, who's to shut their mouths about their lack of decent housing, livable income, health care or going to a great school.

Hunt, stalk, neutralize, zip-tie. Then release and let them go home to sink into further despair, trapped in their misery, imprisoned even if not inside an actual prison, the Bloomberg brand of kids in cages. I speak these truths as I've witnessed them. My RUMBLE podcast, the Bloomberg episode, just posted #RUMBLE #ClickHere.

Related Topic(s): 2013; Former New York City Mayor Michael Bloomberg; Michael Bloomberg; Race, Add Tags
Add to My Group(s)
Go To Commenting
The views expressed herein are the sole responsibility of the author and do not necessarily reflect those of this website or its editors.