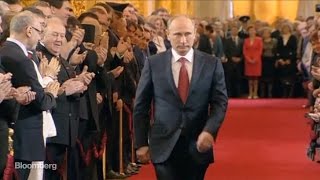 As life on planet Earth enters its recorded year of 2019 the world has only one leader. He is Vladimir Putin, President of Russia. There are in office nowhere in the West any real leaders, only servants of the Oligarchy and vassals of the servants. Donald Trump intended to be otherwise and might yet break out of the orchestrated existence the military/security complex, Democratic Party and presstitute media have created for him.

Putin's humanity and self-control, has maintained peace despite Washington's aggression and provocative actions against Russia. It is Putin who has accepted insults that in the past would have resulted in war.

Putin has paid a price for his self-control. He has maintained peace at the expense of his standing in Russia, if a poll published on fort-russ.com is valid. According to the poll, Russians have "a lost sense of belonging to a great power."

According to the poll, a large majority of Russians regret the collapse of the Soviet Union. Capitalism has brought economic insecurity, and the loss of Russian territory has brought a sense of defeat.

On one hand, these Russian beliefs result from Washington's demonization of Russia and insulting behavior toward Putin. On the other hand, Putin and Lavrov's constrained responses to the lies and false accusations against Russia offend patriotic Russians. No American government would have dared to treat a Soviet leader the way Putin has been treated. The Russians want Putin to stand up for Russia, to cease turning the other cheek, to cease referring to Russia's enemies as partners when it is completely obvious that the West is Russia's Enemy.

The Russian people are tired of the Russian government's toleration of Western-financed newspapers, NGOs, and political parties in Russia. Russia is for Russians, not for Western-financed traitors who tirelessly work to undermine Russia with Western money. Russia is accused falsely of interfering in Western political life, but it is the West that interferes in Russian political life with bags full of money.

The Russians are patriots, which is how they survived and defeated Hitler. Russians want a government that is nationalist, not globalist, and not a government overlooking provocations in hopes of being accepted as yet another Washington vassal. When a poll shows that 66% of those polled feel nostalgic for the Soviet Union, the message is clear that the Russian government's accommodation of the West is a failed policy.

As evil spreads its dominion over the West, it is no longer the peacemakers who are blessed. President Trump's desire to improve relations with Russia were rewarded by former CIA director John Brennan branding Trump a traitor. Trump's decision to withdraw US troops from their illegal and defeated purpose in Syria resulted in Susan Rice, a former national security adviser, declaring Trump to be a threat to US national security. None of Trump's enemies regard worsening relations with Russia to be a national security threat.

It is peace that is declared to be the threat. Even in Russia, Putin's restrained response to provocations has lowered his approval rating.

To have peace so devalued in a world of hyper-sonic thermo-nuclear weapons is evil's triumph.

Related Topic(s): Money; Putin; Traitors; Warmongers, Add Tags
Add to My Group(s)
Go To Commenting
The views expressed herein are the sole responsibility of the author and do not necessarily reflect those of this website or its editors.