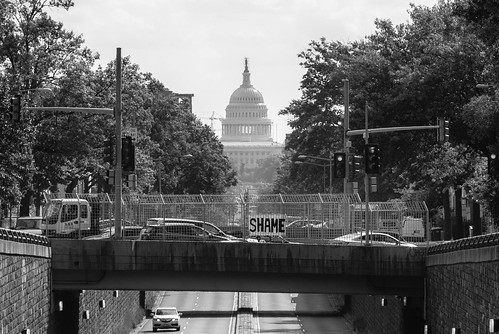 Shame
(Image by MikeSpeaks)   Details   DMCA
Like a child who had gotten caught with his hands in the cookie jar, SCOTUS nominee Brett Kavanaugh looked into the eyes of United States Senators and the American people and said he did not do it. However, no amount of tears or righteous indignation will change the fact that placing "Renate Alumnius" on his yearbook page was not an act of "affection", he was not old enough to legally drink at the time he allegedly tried to rape Dr. Christine Blasey Ford, or that he regularly attended parties like the one described by Ford.

Taken by themselves, these lies are inconsequential; tales from a man suddenly held accountable for the sins of his youth. However, they do not exist in a vacuum. Kavanaugh is a nominee for a lifetime appointment to the highest court in the land. And he is accused of attempting to rape a former acquaintance.

Every child (with the possible exception of Donald Trump Jr.) is taught that just one lie can jeopardize the believability of every other statement that is made by that person. Kavanaugh's sexual harassment of Renate Schroeder Dolphin may not have relevance to the nominee's ability to be a Supreme Court Justice, but his inability to accept responsibility as an adult does. The fact that he would lie about the act exposes further character flaws that do not belong in the highest court in the country. If he is willing to lie so blatantly about this act, can his denial of Ford's allegations be believed?

Yet somehow a third of the country is willing to brush these lies aside. Given that 54 percent of Republicans think that Kavanaugh should be confirmed even "if the charge of sexual assault during a party in high school by Christine Blasey Ford" is true, this should not be surprising. Donald Trump has lied thousands of times since the start of his presidency and his approval rating currently stands at 41%. America has replaced right and wrong with blue and red. We are a house divided. Can we stand?
____________________________________________
Carl Petersen is a parent and special education advocate, elected member of the Northridge East Neighborhood Council and was a Green Party candidate in LAUSD's District 2 School Board race. During the campaign, he was endorsed by Network for Public Education (NPE) Action and Dr. Diane Ravitch called him a "strong supporter of public schools." His past blogs can be found at www.ChangeTheLAUSD.com. Opinions are his own.

Related Topic(s): Kavanaugh Confirmation, Add Tags
Add to My Group(s)
Go To Commenting
The views expressed herein are the sole responsibility of the author and do not necessarily reflect those of this website or its editors.