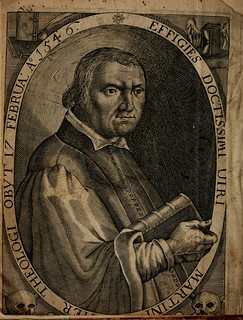 Image from page 5 of .The life and death of Dr. Martin Lvther; the passages whereof haue bin taken out of his owne and other Godly and most learned, mens writings, who liued in his time. (1641)
(Image by Internet Archive Book Images)   Details   DMCA

Why is right wing extremist Christianity causing so much pain in this country when they claim to be disciples of the Prince of Peace? It's Luther's fault.

From The Daily Beast, in breaking from the Catholic church, Luther "rejected the traditional wisdom of what had been his faith community. His rallying cry was sola scriptura--"nothing but the Bible"--and he rejected the notion that ordinary people needed theologically educated leaders to tell them what the Bible said. Ordinary people were invited to read the Bible for themselves, free of the insights of scholars, a Protestant emphasis that continues to this day."

By doing so he planted the seeds for the mischief that has grown into the fundamentalist Evangelical Christianity of postmodern America, a religious system unique to the United States.

For instance, in less than an hour I found these stories on the Internet:

An 8-year-old girl in Tennessee has been told that she cannot return to her Christian school because she defied "biblical standards" by looking like a boy.

An anti-gay pastor demands silence from women in church and uses the Bible as his justification. By the way, he's the one who prays each night for the death of our president.

A Creationist make the case that Neil deGrasse Tyson, on the popular series Cosmos, was misrepresenting science, because while Tyson was explaining true science, he wasn't not treating the Bible as a book of science too.

I'm not sure in what part of the Bible this New York pastor found inspiration for his church's raffle of an AR-15 assault-style rifle. He's using this inducement to get people to come to church. The contradiction of love, compassion and mercy seems to be lost here. But then again, all subtlety is lost in the black and white world of fundamentalism.

Lawmakers in Louisiana will not give up easily. They voted against repealing an unconstitutional creationism statute. They're going to make religion into science, no matter what anyone else says. "State senators voted 34-5 without any debate against Senate Bill 70, which would have removed the Balanced Treatment for Creation-Science and Evolution-Science Act from state law, reported the New Orleans Times-Picayune."

No, I'm not arguing for the return of the old intermediary structures. Nor am I claiming that the Bible, with all its contradictions, has no moral authority. I am saying that the idea that we should equally respect every person's individual interpretations of an ancient book of confusing ideologies, is dangerous, as evidenced by the small sampling above.

What we're seeing is society honoring the moral authority of unqualified people who may or may not even be mentally stable. When we decree the individual and his epistemology to be sacrosanct with no further investigations or qualifications we have the moral chaos we see in America today.

Yet, we are careless if we dismiss society's core moral foundations found in the Bible. We throw the proverbial "baby out with the bath water" when we refuse to acknowledge how this flawed book and the religions that formed around it have brought about more good than evil.

So how do we keep that good in our lives and reject that evil? How do we respect the wisdom of the ages; that of thoughtful people who preceded us, even now as so many try to distort it for personal agendas?

How do we use that wisdom to live better personal lives, regardless of the ruinous fundamentalist trends in our society?

The first step is to recognize that the challenge is uniquely personal. It is an opportunity for each of us on how to live our lives well. Not for some supposed reward in an equally supposed afterlife. But in this life and for this life.

Related Topic(s): America; Anti-gay; Bible; Christianity; Community; Community; Evangelical; Faith; Religion; Wisdom, Add Tags
Add to My Group(s)
Go To Commenting
The views expressed herein are the sole responsibility of the author and do not necessarily reflect those of this website or its editors.