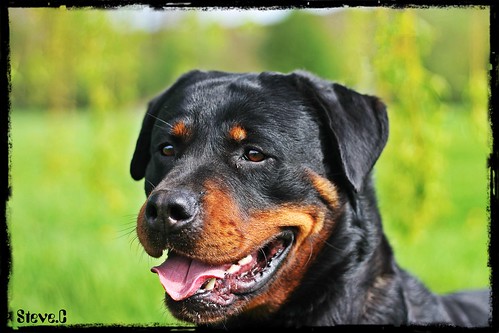 Will Rogers once said: "I never met a man I didn't like". I could, personally, never make such a statement. I, being admirer of women, have even met some of them I didn't like; 'tis the human condition, I suppose. However, I can tell you sans equivocation or consternation, that I have never met a child or a dog that I did not only like, but love.

About five years ago, Savannah and I lost a dear relative and friend. Her name was "Darkside". Darkside was an AKC Kennel registered pedigree bull terrier. Darkside, quite literally, grew up with Savannah; we had, the three of us, lived in the same house for several years. Darkside was more of a sibling (and an older one, to boot) to Savannah, and my best friend. Darkside, Savannah and I went through many a trial and tribulation. From a horrific diagnosis of my having SLE (almost numerically impossible in a black family to go from a female sibling, who would die from the illness, to a black male sibling) to the day to day difficulties of single parenting and all of the unplanned, unforeseen events that comprise the modern day human existence in general; Darkside was there with me, with us.

It has been said, by some, that one should take adequate time to mourn the loss of a "pet" before acquiring another. Darkside was not a pet; she was a family member and, thusly, could not be replaced. But, just as a family that deals with the tragedy of the loss of a loved one feels unbearable loss and pain, they do not unwelcome new members of that family. Births are warmly celebrated; for each new member is unique upon his or her self despite the coldness left by the chilly fingers of the Angel of Death that snatched away a predecessor.

Darkside passed away in October of that year. I told myself that "I will never have another dog" (rather stupid given my love for them and the fact that I have had them all of my life). Two months later, during Kwanzaa season, I was grieving intensely about Darkside (I still do). However, Savannah's grief was far more of a concern to me, as I realized that she had not the capacity to deal with the grief as had I. Further, Darkside's death was within twenty four months of the death of one of our mentors; Ms. Ruby Rawlings. Upon consideration of the circumstances, my child's age at the time, the holiday season, etc. I decided that I would visit the local animal shelter. I told the Officer in charge that I was only interested in a puppy. She took me to the area of the shelter designated for puppies. Here in California, a puppy must be fully weaned (or at least eight weeks) before it can be sold or adopted; a great law, by the way.

As I strolled down the aisles, wishing I could take them all (yet feeling like I was not 'ready'), there was this bear. That's the only way I can describe her. She was the last left of a litter of four; the other three siblings were male and got scooped up immediately. This bear was, in actuality, an Australian Shepard (noted for intellect)-Rottweiler (noted for protective tenacity) mix; but she looked just like a tiny Grizzly cub. When she saw me she started to become very animated and started howling. Theretofore, I had not approached any of the pups, but she would not be ignored. So, I bent over and stuck my fingers in the cage to rub her head; which she allowed me to do with great glee then, she bit me. We all had a good laugh. I found an old appliance box to line with blankets (with plastic underneath). It was an unusually cold winter in Southern California that year; she slept by the fireplace that night. She never cried as do most freshly weaned pups. We named her Mau-Mau.

Unlike Darkside, who had a very serious no-nonsense personality, Mau-Mau was the personification of mischief. As far as she was concerned the world was one gigantic toy-box; but she was also vigilant and protective. By the time she was six months old, she weighed a good 80 pounds; she was bigger than Savannah. Mau-Mau was 80 pounds of ripped muscle and teeth. Since Savannah was first to bed every night, Mau-Mau would get on her bed and lie next to her until she was asleep (the canine's keen sense of hearing tells them when you are asleep because the breathing changes). As soon as Savannah was asleep, Mau-Mau would come into my room and lie on my bed and wait for me. This is where I am hoping you are asking yourself: what is the point given the title?

Here is the point.

That dog was the size of a small man, and could have inflicted major injury, even death, on a large man or any other human being. Yet, I never had the concern that she would attack my daughter; or bite my face off while I was sleeping. I had such utter confidence because Mau-Mau was loved, she was treated well. She was respected, accepted and wanted. On the other hand, had I mistreated that animal; beat her, disrespected her, was abusive and mean to her there is absolutely no way I would have closed my eyes around that dog, let alone allowed her to be unattended with my child. I would have been afraid of her.

Trek with me here white folks.

You can do it.

Writing in this forum has validated much of what I already knew about Blackism and the perpetrators of it. I have marveled at the use of the words "scary", "threat", "fear" and "safety" in reference to black Americans (especially the men) by white Americans, and I am fully aware that part of what perpetuates white brutality towards blacks is just that ...fear. And that fear is warranted; it is warranted by their own actions which now, after four centuries, they are imprisoned by. Even those that want to turn the page, that realize white privilege, cannot. They cannot because their collective, constant and long term abuse of this animal has left them in the precarious position of maintaining the status quo or closing their eyes around that animal. White people don't fear, hate and devalue Black People in America because of what they have done, or might do; they fear them because of what they themselves have done and continue to do to a people, as a people. This is not only responsible for pervasive Anglo Cognitive Dissonance (ACD), it is the main reason why any expression of black self-defense terrifies them. Were it anyone else they would simply see it as being what it is; but their fear perverts self-defense by a black man as something "threatening". Patrick Henry said "give me liberty or give me death" and he is lionized as a "great American patriot". Black Person in America says the very same thing they are an "angry threat".

You made your bed, lie in it.

It is this reality, this fear, that assures me that as long as the United States exists Black People in America will remain, as a group, subjugated and relegated to a corner of society that no other group ever has been, nor ever will be. The very uniqueness of how Black People in America came to this country, and their subsequent humiliation, ostracization, brutalization and maltreatment, puts them in a category unparalleled in human history. For they are/were "involuntary immigrants (white wash for kidnapped)" in a "nation of immigrants". Excluded from the hallowed "Declaration of Independence". They were not humans, but "property" (a dubious honor shared by no other group of Americans). After four centuries of this legacy, to think that whites, or Black People in America, can "just get over it" is trivialization to the point of ferocious insult.

I imagine sleeping with one eye open is quite tiring; especially after 400 years.

Related Topic(s): Anglo American Despots; Brutality; Family; Fear As Policy; Fearmonger; History; Independence; Original Sin; Parenting; People; (more...) Time, Add Tags  (less...)
Add to My Group(s)
Go To Commenting
The views expressed herein are the sole responsibility of the author and do not necessarily reflect those of this website or its editors.