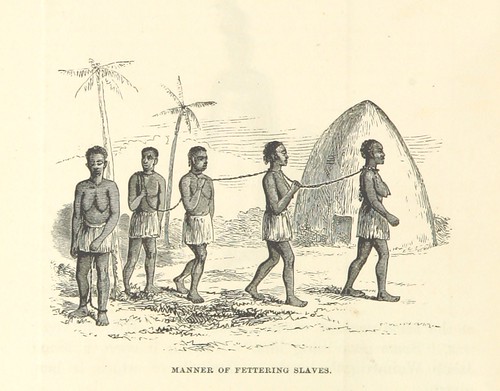 American "His-Story" is replete with white fantastic fictions (lies). And though the fictions are innumerable, they are augmented and often enhanced by omissions which are introduced at the very earliest stages of a child's education. The most prominent vehicle for the white fantastic fictions and omissions are American textbooks. One of the great omissions is the industry of slave breeding; particularly as it pertained to banking. You see, the "matter" of the United States is, indeed, Africa.

It is accepted, by most scholars, that there were about 500,000 kidnapped Africans that survived the horrendous, involuntary journey to the shores of North America; the number that did not survive will never be known. And just for argument's sake do I accept these numbers especially given the fact that there were few birth and death records kept on the "property" that was a black person's life. Ultimately, that 400,000 became over 4 million enslaved black Africans in a relatively short period of time. American slavery was, among other things, a slave breeding industry. The growth to 4 million people (properties) was, in and of itself, an economic expansion. When an enslaved child was born that child was worth $75 or $100 at birth. That did not mean that the child would be "sold" for that amount of money immediately, it was an appraisal for the purpose of determining the slave owners wealth. Thus, the slaver could borrow more money from the bank in terms of a "mortgage". The baby was, in effect, collateral. The birth of every enslaved child created "credit" which, according to modern monetary theory, means created money.

Virginia is often referred to as The Mother of Slavery, which both created, and perpetuated, a legal system by which the child born to an enslaved woman from Africa would automatically "inherit the condition of its mother"... no matter who the father was. This is important to understand, especially in terms of the wholesale rape of black African women by white slavers; Thomas Jefferson comes to mind. Though, in fairness to Mr. Jefferson and his ilk, the woman was not a human person but "property" so, obviously, she had zero legal rights (or rights of any type) and could not "just say no". The point being, since she was not human she could, therefore, not be "raped" for one can not, legally, rape a dog, a car or a refrigerator. This law also ensured no "freedom" for children born to a white father. Ergo, a white man could drop his pants, demand favors of a sexual nature, seek pleasure, brutalize a woman and get paid for doing it. Dwell on that for a wee bit and let your mind go free. As the great musician Dr. George Clinton said: "free your mind, and your ass will follow". The reason that Thomas Jefferson was instrumental in outlawing the importation of slaves from Africa (signed into law March 2, 1807) had absolutely nothing to do with any noble regard for the personage of slaves; it had everything to do with money. He was raising the stock prices for slave breeders and domestic slavers. Period. It was an economic move.

Essentially two states, Virginia and South Carolina, were the catalysts for the expansion of slavery and, thusly, the United States territories. Virginia being the center of the slave breeding industry, and South Carolina being the center of slave exporting. In fact, South Carolina is often referred to as "a colony of a colony in search of a stable crop". That stable crop became slaves and their exportation (and exploitation). Since Barbados (the original "sugar island") was the wealthiest of the British Colonies and sugar was it's essential crop, it had an insatiable appetite for slaves. Sugar killed its workers within ten years and was known as a "killing field". Rice and indigo also became cultivated; these crops were also very hard on the slaves. Ergo, there was a constant need for replacements. The slave breeding permeated the southern states and they had all of the labor they needed, but the "human crop" was needed and used to fulfill the requirements for labor in the "new territories". And, just as Mr. Jefferson foresaw, the incentive to develop more territory increased "stock" prices.

When I was a child, every summer I left Los Angeles to spend the summer with my grandparents in Kansas. There I learned about hunting, fishing, baseball, lightning bugs and a plethora of other things; but mostly, I learned about farming. And one of the primary things one learns about farming is that you are always looking to create more. More eggs from the laying chickens in the brooders, more crops, more pigs, more cattle, etc. If an animal does not, or cannot, breed it will be slaughtered or sold. If a crop does not produce greater and greater yields, it will be replaced; it is the nature of the beast, so to speak. The black labor force was part of "farm stock". If you were a laboring black woman, your number one obligation to your slaver was to reproduce as early in your life as it was possible and as often as possible. If you did not reproduce you would be sold; something that instilled sheer terror in the slaves. This terror was not a result of being enamored with one slaver over the other, but a fear of yet another unknown, brutal environment where the slave would have neither acquaintances nor environmental familiarity. The breeding of these slaves included rape by white slavers, forced mating, and "arranged marriages" (which was weird, I mean how do you "marry" property?). Good ole "founding father" Thomas Jefferson said it best in the only book he ever wrote entitled "Notes On the State of Virginia" (he was 77 years old at the time he gave the following advice): " I consider a woman that brings a child every two years more productive than the best man on the farm what she produces is an addition to the capital." That would include the children he had with a 14 year old girl named Sally Hemings; Jefferson "owned" the children and could, thusly, sell them.

It is what it is, because it was what it was.

In the final analysis, what I find most ironic is that the descendants of that valued "property" lives are so devalued today. Though paradoxical, the black "American" has less value to the white man today, than he/she did then (prison industrial complex, sports/minstrel notwithstanding).

Black People in America will never know what happened to them until they educate themselves, and what happened to them is likely the greatest atrocity in human history. There is a reason that these individuals were, and continue to be in various ways, denied education. For if they ever really come to grips with, and fully understand, what has been done to them the jig is up, literally. That is why it is imperative to be certain that the last thing they do is get a library card and use it, or attend a decent school. I can not be fooled by such tomfoolery, because I learned the game from Tom. I was educated by Tom. I know Tom's code and I am not his uncle.

Related Topic(s): Africans; Bank Of New York; Bank-of-america; Bankers; Banking Violations; Banksters; Economics; Human Beings; Human Rights; Human Traffickiing; (more...) Money; Rape, Add Tags  (less...)
Add to My Group(s)
Go To Commenting
The views expressed herein are the sole responsibility of the author and do not necessarily reflect those of this website or its editors.