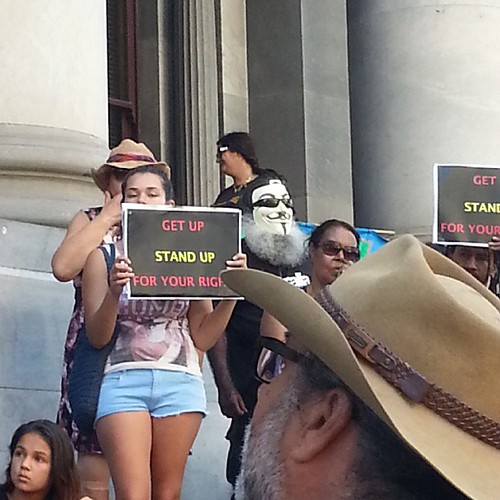 Blackfella: 10 Poems from Down Under

This is a set of 10 poems reflecting on the Black experience in Australia, where I've been ensconced for nearly a quarter of a century, more on than off. In America, my native land, one who pays attention is constantly made aware of the legacy of slavery and the continuing barriers in the Black experience of democracy when it comes to their Constutionally-protected mandate of "life, liberty, and the pursuit of happiness." Here in Australia, white quietly rules the roost, and Aborigines are largely faded in the background, only brought forward occasionally for paid gigs where elders literally consecrate the ground on which a convention of whites takes place. (Someone will whisper to them, on the way out, to be sure to report this income to Centrelink, as it may affect their Newstart payments.) It would be like Americans inviting indigenous tribes in for a demonstration of a rain dance, then telling them to ixnay out the back door afterward, where a courtesy Uber is waiting to take them back to the reservation. There is no legacy of slavery, per se, in Australia; no one had their ar*e dragged here against their will from Africa (although many a mighty whitey had his ar*e dragged here from England) to slave in the cottonfields to make Che t-shirts. It's mostly a case of dispossession and displacement and Jim Crow. Below is poem #1/

It is the function and form of paper

that wipes away our grins, gives us the shits

when we read about the latest caper

among the native title tribunal

lot, another land grab and another,

and mocks the largesse of their White Brother

who means well, despite the contrapuntal.

There are times it makes mates bristle and seethe

Related Topic(s): Aborigines; America; Arrest; Democracy; Diaspora; Happiness; Legacy; Liberty; Poems; Poetry; (more...) Reconciliation; Time; Tribunal, Add Tags  (less...)
Add to My Group(s)
Go To Commenting
The views expressed herein are the sole responsibility of the author and do not necessarily reflect those of this website or its editors.

STAY IN THE KNOW
If you've enjoyed this, sign up for our daily or weekly newsletter to get lots of great progressive content.
Series: "Blackfella: 10 Poems from Down Under"