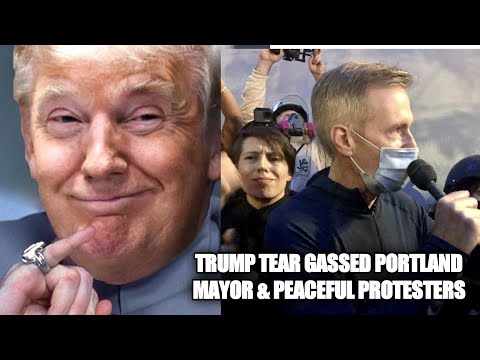 Taking a page from Hitler's Brownshirts, Donald Trump is sending his secret paramilitary forces into U.S. cities to terrorize the population. Ostensibly designed to "restore order" in the wake of massive uprisings against white supremacy and police brutality, this move appears to have a more cynical purpose lurking behind it: Trump's desire to tar Democrat-led cities with a false narrative to boost his sagging poll numbers. But protesters are taking to the courts to rein in an out-of-control executive.

In light of the brutal federal occupation of Portland, Oregon, Black Lives Matter (BLM) Chicago and other organizations filed a lawsuit on July 23 to prevent a Portland-style federal domination of their city. They allege that Trump is dispatching agents to Chicago in order to "intimidate and falsely arrest civilians who are exercising their constitutional right to speak and to assemble." The groups seek an injunction to prohibit federal agents from "interfering in or otherwise policing lawful and peaceful assemblies and protests" in Chicago or arresting people without probable cause.

The same day the BLM Chicago suit was filed, a federal judge in Portland issued a 14-day temporary restraining order that bars federal agents from threatening or attacking journalists and legal observers. Significantly, the judge wrote that any "willful violation" of his order will violate "a clearly established constitutional right" and thus the officer will not be able to claim the qualified immunity defense.

On July 12, federal agents in Portland shot two journalists, Mathieu Lewis-Rolland and Garrison Davis, with impact munitions. Lewis-Rolland was shot 10 times in the back and side, all above the waist. Davis was hit in the back with a tear gas canister, which fell into his bag and inundated him with tear gas. He was also shot with pepper bullets and other munitions. Both men were clearly marked as members of the press. Davis witnessed federal agents swinging truncheons as they chased legal observers clearly affiliated with the National Lawyers Guild.

Portland has seen unidentified federal officials in unmarked vehicles snatch peaceful protesters off the streets, transport them to unknown locations, without informing them of why they're being arrested, and later release them with no record of their arrest. The troops are lobbing chemical weapons and dangerous projectiles at protesters, journalists and legal observers. These actions violate the First Amendment's free speech and press guarantees, the Fourth Amendment's prohibition on unreasonable searches and seizures, and the Fifth Amendment's right to due process of law.

Moreover, the Tenth Amendment provides that powers not delegated to the feds are reserved to the states. The abductions took place outside the jurisdiction of federal authorities, the people abducted were not attacking federal personnel or property, and those abducted were not on federal property when they were abducted, according to a lawsuit filed in federal court by a public benefit corporation, a church and two Oregon state representatives.

Furthermore, Trump's troops are present over the objection of Portland Mayor Ted Wheeler, who says federal troops "are sharply escalating the situation " actually leading to more violence and more vandalism." Oregon Gov. Kate Brown tweeted, "I told Acting [Department of Homeland Security] Secretary Wolf that the federal government should remove all federal officers from our streets. His response showed me he is on a mission to provoke confrontation for political purposes."

Federal forces are supposedly there to protect federal property, which is a miniscule area of Portland. "The idea that there's a threat to a federal courthouse and the federal authorities are going to swoop in and do whatever they want to do without any cooperation and coordination with state and local authorities is extraordinary outside the context of a civil war," said Cornell law professor Michael Dorf.

Incognito arrests and crowd control are beyond the authority and training of Trump's troops. Yet agents from Customs and Border Protection, U.S. Marshals Service and Federal Protective Service have been patrolling non-federal areas of Portland, brutalizing and illegally arresting law-abiding people. The only uniforms they wear are military fatigues with patches that say "POLICE." They have no other identifying information.

"Ordinarily, a person exercising his right to walk through the streets of Portland who is confronted by anonymous men in military-type fatigues and ordered into an unmarked van can reasonably assume that he is being kidnapped and is the victim of a crime," the Oregon Department of Justice (DOJ) states in its lawsuit against the Department of Homeland Security, U.S. Marshals Service and Federal Protective Service, filed on July 17. Kidnapping by "militia or other malfeasants dressed in paramilitary gear" would trigger the lawful right of self-defense.

The Oregon DOJ's lawsuit accuses the federal forces of violating "the state's sovereign interests in enforcing its laws and in protecting people within its borders from kidnap and false arrest." It alleges violations of Portlanders' First Amendment rights to peacefully gather and express themselves. The purpose is to discourage lawful protest, "an illegal prior restraint" on the right "to peacefully protest racial inequality."

In addition, the lawsuit alleges that defendants violated the Fourth Amendment by seizing protesters without a warrant or lawful exception to the warrant requirement. And it charges defendants with violating the Fifth Amendment's prohibition against "depriving a person of life, liberty or property without due process of law."

On July 15, plaintiff Mark Pettibone was accosted by armed men dressed in camouflage, removed from the street, forced into a van and driven through downtown to a building believed to be the Mark O. Hatfield United States Courthouse. Pettibone was placed in a cell and read his Miranda rights, but was never told why he was arrested. He was not given a lawyer and was later released with no citation, paperwork or record of his arrest.

The Criminal Justice Division of the Oregon DOJ and the Multnomah County district attorney have launched an investigation in the case of Donavan LaBella, who was shot in the head with an impact munition on July 11, as he was holding a speaker above his head. The federal agents fractured LaBella's skull and shattered his facial bones.

Related Topic(s): Black Lives Matter; Brutality; Chicago Politics; Super Delegates; Surveillance; Trump Crime; Trump Liar; Trump Protesters; Trump Untrustworthy, Add Tags
Add to My Group(s)
Go To Commenting
The views expressed herein are the sole responsibility of the author and do not necessarily reflect those of this website or its editors.