I read a great article in The Atlantic by Ta-Nehisi Coates entitled "The Black Family in the Age of Mass Incarceration". (Oct. 2015). I highly recommend it to readers of my blog and I hope to write more about it from my own perspectives in the future. The lengthy nine-chapter article begins with a discussion of Daniel Patrick Moynihan's famous report, now 50 years old, "The Negro Family: The Case for National Action."

For those of you currently blessed with youth, Moynihan was a scholar, US ambassador, a New York State Senator and a very influential intellectual in the waning decades of the 20th century. (It still feels odd for me to say it.) At the time he wrote his report, he was ensconced as a young career civil servant in President Johnson's administration on the eve of passage of the civil rights bill. He was one of many invisible administration officials who work behind the scenes in every public administration in government. He would have been a colleague of Bill Moyers and Chris Matthews, all of whom were among the anonymous legions that make governance possible in every administration.

The thrust of Moynihan's report was the premise that structural white racism caused poverty in the black community and destroyed black families through a particularly devastating impact on black males. The intractable joblessness, poverty and social impotence of black males was forcing black families to become matriarchal: a status in conflict with the rest of American society. His critique of the public-welfare system centered around the fact that it reinforced this matriarchal shift while marginalizing (some would say demonizing) black fathers. He argued that the federal government was underestimating the damage that this was causing. Moynihan wrote, as quoted in the article:

"The Negro family, battered and harassed by discrimination, injustice, and uprooting, is in deepest trouble... While many negroes are moving ahead to unprecedented levels of achievement, many more are falling further and further behind."

In his view, the marginalization and emasculation of black males, even within the black community, is the root cause, and not the symptom, of the problems that we still read about today in local news accounts. Juvenile delinquency, higher high school-dropout rates, gangs, higher black-on-black crime rates, etc., and all symptoms of structural racism, he would argue. Moynihan went on to write:

"In a word, most Negro youth are in danger of being caught up in the tangle of pathology that affects their world, and probably a majority are so entrapped. Many of those who escape do so for one generation only: as things now are, their children have to run the gauntlet all over again."

Moynihan's report was a prescient analysis of critical social problems that foreshadowed the accumulating impacts of structural racism, including mass incarceration and the ongoing destruction of black families today. His report made enough of an impact on Lyndon Johnson's thinking that it was the subject of a subsequent speech that Johnson gave on the breakdown of black families in June of 1965. The speech was written, in part, by Moynihan himself. Johnson understood Moynihan's point that white structural racism was responsible for the ongoing destruction of black families.

Johnson's message in that speech, however, was quickly turned upside down in a social atmosphere that was in no mood to accept any blame for the plight of poor black communities. The unreceptive public, and the media interpretation assigned to the Johnson's speech, was that the root of poverty and social ills in the black community was a result of a weak black-family structure, and of black males in particular. 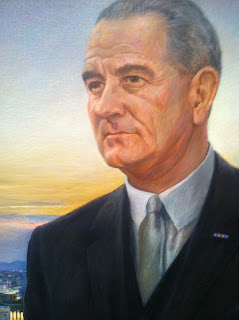 Moynihan's report was only an internal administration document at that time. Coates writes that Moynihan printed one hundred copies of the report, submitted just one copy and kept the other ninety-nine copies in a safe. Moynihan had also removed from the report a whole section he had written on government-policy recommendations for solving these problems. His rationale for this omission was that squabbling over proposed solutions would distract from sounding the alarm bells and raising a discussion on the plight of black families.

While the Moynihan report was not a public document at the time, internal discussions of the report spilled into the public domain and became a matter for public speculation. The false narrative that black families are responsible for their own social ills was ascribed to him and Moynihan was ridiculed by social activists for the black community. A moment had passed, the damage was done and the inverted perversion of Moynihan's report seeped into the public consciousness despite efforts to dispel it.

Much more can be said at this point about the subsequent history of government policies and the negative impacts it has had on black families. This is covered quite well in the subsequent eight chapters on Coates' article, and again I recommend you read it. My own experience working with public-welfare families over the past three decades affirms Moynihan's views and his criticism of the matriarchal federal public-welfare system.

I hope to say more about this in the future also, but in part II of this article I want to shift gears and focus attention on that tactical decision the young Daniel Patrick Moynihan faced when he pulled his policy recommendations from the original report. In doing this an important lesson may be learned about elevating a social problem to the level of a public issue within the context of the times. Were there alternatives that might have been more effective? Would having raised a social problem to a public issue failed to happen had he left his proposed solutions in the original report? And what is it about the compressed and rarefied air where civil servants work behind the scenes of public administrations that would cause him to lock up ninety-nine copies of his original report?

Related Topic(s): Civil Rights; Hate-Racism-Bigotry; History; Johnson Lyndon; Public Adminstration; Race African American Black Negro, Add Tags
Add to My Group(s)
Go To Commenting
The views expressed herein are the sole responsibility of the author and do not necessarily reflect those of this website or its editors.