"The Israelis may have finally stepped on the third rail of congressional relations, with their joint decision with President Trump to ban Omar and Tlaib."

If there still exists within the Congressional Black Caucus even an ounce of self-respect, or respect for the Black voters that put them in office, these Black politicians will rethink their shameful record of groveling at the feet of Israel the country that meddles far more than any other in the internal affairs of the United States. Certainly, the Israelis have no respect for the U.S. Congress, which they treat as a fat sugar-daddy,to be milked year after year for billions in aid and weapons, and for support in world forum's, no matter what crimes Israel commits. However, the Israelis may have finally stepped on the third rail of congressional relations, with their joint decision with President Trump to bar two Democratic Congresswomen , Ilhan Omar and Rashida Tlaib, from entering Israel. The two had planned to visit the occupied West Bank, as do many congressional delegations. But Israel and Trump, the most pro-Israel U.S. president in history, decided to yank permission, citing Omar and Tlaib's support for the global boycott and disinvestment campaign against Israel, known as BDS.

So, where does Israel draw its base of popular support in the U.S.? According to the poll, it comes from Trump voters, 65 percent of whom believe that Israel is an ally. But two out of three Americans disagree as do four out of five African Americans.

"The Israelis have no respect for the U.S. Congress, which they treat as a fat sugar-daddy." 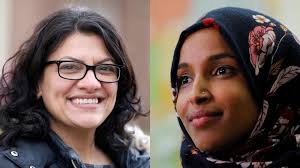 Nevertheless, on any day of the year, some U.S. congressional delegation is touring Israel, the world's last apartheid state. Forty-one U.S. Representatives were in Israel when it was announced that the two Congresswomen had been blacklisted. We shall see if the U.S. Congress views this as Israel biting the hand that feeds it. But Black voters, who are the constituency most sympathetic to the plight of Palestinians, should do a mass recall of the politicians that purport to represent them in Washington. Except for Ilhan Omar, the freshman Representative from Minnesota, the whole of the Black Caucus is in thrall, or in fear, of Israel. When Israel was massacring two thousand Palestinians in Gaza in 2014, the Congress unanimously passed a resolution supporting the Zionist state. Not even California's Barbara Lee voted against it. And just weeks ago, when the House approved an outrageous bill condemning the boycott Israel campaign, only six Black lawmakers voted against it . The rest of the Black Caucus shamelessly kow-tows to Israel's every wish with no concern for the political sensibilities of their Black constituents.

Israel took the unprecedented action against Omar and Tlaib at the urging of President Trump. The Black Caucus likes to claim that it stands up to Trump, but it has never stood up to Israel. We shall see if there is any limit to the insults the Black Caucus will accept to stay on the good side of the Israel lobby.

BAR executive editor Glen Ford can be contacted at Glen.Ford@BlackAgendaReport.com.