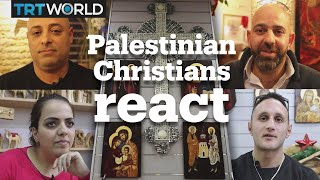 Its decision to trap the minority group in Gaza this Christmas is a prelude to a seemingly contradictory plan to sap the people of the will to stay and struggle for what is theirs.

Gaza's minuscule community of Christians will spend this Christmas feeling even more under siege than normal. The Israeli military authorities have denied the vast majority of the enclave's 1,100 Christians a permit to exit the Palestinian territory for the holiday season.

Unlike previous years, none will be allowed to join relatives in Bethlehem, Jerusalem or Nazareth, or visit their holy places in the West Bank and Israeli cities. Alongside the enclave's nearly two million Muslims, they will be forced to celebrate Christmas in what is dubbed by locals as "the world's largest open-air prison."

Israel has issued 100 permits for travel abroad, via Jordan, but even those are mostly useless because only one or two members of each family have been approved. No parent is likely to choose to enjoy Christmas away from their children.

As ever, Israeli authorities have justified their decision on security grounds. But no one really believes this tiny, vulnerable minority poses any kind of threat to their giant military and intelligence-gathering machine.

For decades Israel has pointed to the steady decline of the Palestinian Christian community as proof of a supposed clash of civilizations in which it is on the right side. The gradual exodus of Christians, it argues, is evidence of the oppression they suffer at the hands of the Palestinians' Muslim majority. Claiming to represent Judeo-Christian values, it supposedly stands as their sole protector.

In fact, the fall in Palestinian Christian numbers relates chiefly to other factors.

That began with the country's creation in 1948 and the events Palestinians call their Nakba, or Catastrophe. Christians, who lived historically in Palestine's main cities, were among the first targets of the new Israeli army's ethnic cleansing operations.

Since then, those in the West Bank, Jerusalem and Gaza have sought to escape from decades of occupation, while those belonging to a Palestinian minority living as citizens in Israel have tried to break free from the institutionalized discrimination they face in a self-declared Jewish state.

Christians have enjoyed greater success than Muslims in bolting the region because of their historic connections to international churches. The legacy of missionary activity church-founded schools and hospitals in the region have offered a gateway to the West and a new life.

The current treatment of Gaza's Christians hints at the lie in Israel's claim that it protects Christians. It has denied them permits for two reasons unrelated to security.

Related Topic(s): Christian Leaders; Christianity; Christmas; Israel 1948; Israel Attacks Gaza; Israeli Intransigence; Israeli-palestinian; Nakba, Add Tags
Add to My Group(s)
Go To Commenting
The views expressed herein are the sole responsibility of the author and do not necessarily reflect those of this website or its editors.