Disclosure Of Obama Birth Certificate Puts MILLIONS Out Of Work!! Breadlines Begin To Sprout Up! 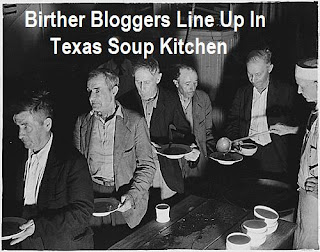 With the disclosure of President Barack Obama's birth certificate, the REAL conspiracy has come out: create a booming industry of Birthism, then when it's at its height and Presidential candidates attach their stars to the movement, pull the rug out from underneath it all! Ingenious! The stock market will collapse! Birther leaders will be raining onto city pavements! Donald Trump's three hairs will fall out!

OK, so none of that has happened, but give Birthers some credit: they've created a unique industry based on one conspiracy theory and now they have nothing.

Well, almost nothing. Spin doctors and conspiracy-hungry Right Wingnuts are hard at work trying to mold the news into something sustainable or coming up with new theories. From the Washington Post, and Talking Points Memo (Best of the Birthers) we can see Birthers scrambling as if to stabilize themselves after an earthquake :

Orly Taiz - "Queen of the Birthers." She still thinks there's something fishy about the long form because Obama didn't show it until now. She also thinks it might be fake because it stated "African" rather than "Negro" on the long form. She thanked Donald Trump for "forcing the President's hand."

Donald Trump - real estate mogul and reality TV star. He agrees with Orly: he now thinks he has power over Obama. However, on George Stephanopoulos' program last week he said that he's proud of his company and would welcome full disclosure:

TRUMP: I have a great company, I've done a great job which I've run you'll see what a great job because I'll do a full disclosure of finances.  STEPHANOPOULOS: Including tax returns? TRUMP: Maybe I'll do the tax returns when Obama does his birth certificate.

Sean Hannity - FOX News pundit, major shill for the Republican Party and "journalist" responsible for "Dijon-Gate". Hannity has stated that he was "birther curious." However, Hannity and FOX kept the birther movement alive by airing it in at least 52 different segments.

It would be a big mistake for everyone to jump to a conclusion now based on the release of this document, which raises as many questions than it answers."

Farah also offers a new spin on the Birther movement and citizenship:

Next up: who was your great grandfather?

Rev. Dan Vojir is has been writing/blogging on religion and politics for the better part of ten years. A former radio talk show host (Strictly Books €" Talk America Radio Network) and book publisher, Dan has connected with some of the most (more...)
Related Topic(s): Bachmann-Michele; Birthers; Conspiracy Theories; Donald Trump; Obama Weird Stuff; Orly Taitz; Rush Limbaugh, Add Tags
Add to My Group(s)
Go To Commenting
The views expressed herein are the sole responsibility of the author and do not necessarily reflect those of this website or its editors.