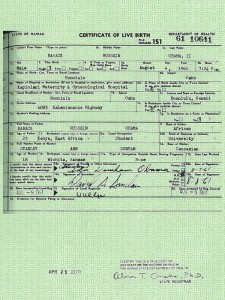 Stating that he's finally had enough of the silliness and expressing his desire to return to the business of running the country, President Obama released the long-form version of his birth certificate, ending Birther Madness forever. Or not.

Donald Trump immediately took credit for the release, declaring that it was his influence that finally forced the White House's hand. No word on whether or not The Donald will now release information on his original hairline.

And, things are getting ugly for GOP Budget Committee Chairman and Wisconsin Rep. Paul Ryan, who had to be escorted from his most recent heated town hall meeting by the police as protesters surrounded his car.

Ryan is under attack for his budget solution, which replaces Medicare with a voucher system while maintaining tax cuts for the very wealthy. If these nasty town hall meetings are any indicator, it seems that at least some Americans are finally waking up to the reality that voting Republican is akin to a slow suicide.

And Democrats are losing a major political backer as a result of their wishy-washy stance on labor rights. According to the New York Times...

"The nation's main firefighters' union, long a strong supporter of Democratic candidates, announced on Tuesday that it would indefinitely suspend all contributions to federal candidates out of frustration with Congressional Democrats who, union officials say, have not fought harder against budget cuts and anti-union legislation."

Can't blame them. Why support a group of politicians when they continue to break their avowed campaign promises to support worker's rights?

Kathy never expected a career in radio as a talk show producer. Born and raised in Atlanta, Georgia, Kathy was completing her nursing degree when in 2001 - in an emergency - she was asked to fill in as the producer of Mike's program. Within a few (more...)
Related Topic(s): Birthers; Obama; Republican, Add Tags
Add to My Group(s)
Go To Commenting
The views expressed herein are the sole responsibility of the author and do not necessarily reflect those of this website or its editors.