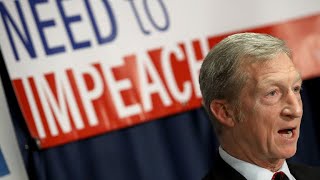 If liberal billionaires like Tom Steyer want to have a real and lasting impact on American politics, they should seriously think about buying a nationwide radio network.

Bloomberg reports that iHeartMedia LLC, previously known as Clear Channel, is "open to takeover talks." It's the largest operator of radio stations in the nation.

The simple fact is that if Richard Nixon had had hundreds of radio stations in virtually every city or town in America of any consequence, with all of them running right-wing talk nonstop, it would have been difficult to impeach him.

If Nixon had had Fox News in addition to all that radio power, he could have safely and easily pulled an Andrew Jackson (who sneered at and ignored the Supreme Court's order to stop the Trail of Tears) and refused to turn over his tapes when SCOTUS ordered it, thus avoiding both impeachment and resigning office.

As Trump may well do when Mueller's final reports come out. (It's probably not a coincidence that Andrew Jackson's portrait now hangs in the Oval Office.)

Liberty Media made a $1.4 billion offer to buy 40 percent of the debt, and effective control, of iHeartMedia (it's bankrupt and massively in debt because of a failed takeover by Mitt Romney's Bain Capital, but that's another story) and iHeart turned it down as insufficient.

But with just a little more money, a progressive billionaire or two could own a nationwide radio network with virtually 100 percent penetration, and restore progressive voices to the nation's largest stations.

The billion-dollar-plus cost of iHeartMedia, along with the eye-popping profit numbers and immense political influence of billionaire Rupert Murdoch's Fox News and Wall Street Journal, shows just how powerful and valuable the right-wing media machine has become.

Back in 2004 when Air America was rolled out, it was successful for as long as it was in large part because it could lease stations owned by what was then Clear Channel and is now iHeartMedia: we were on over 50 Clear Channel stations in the nation's major markets, and drew very good ratings, even occasionally beating Rush Limbaugh and his ilk on competing Clear Channel stations.

Following a string of Democratic victories in cities and states where Clear Channel was leasing stations to Air America, the company was purchased in a leveraged buyout by Mitt Romney's Bain Capital and Thomas Lee.

Meanwhile the right-wing media machine continues to elect Republicans with big funding from right-wing corporations and the billionaires that own them and fund right-wing think tanks. As Ken Vogel, et al, point out in a 2011 article for Politico, "The Heritage Foundation pays about $2 million [a year] to sponsor Limbaugh's show and about $1.3 million to do the same with Hannity's -- and considers it money well spent."

To the best of my knowledge, none of the talkers on the left has ever been funded in such a fashion. Small wonder that Hannity now owns a real estate empire worth tens of millions, and Limbaugh can brag of an eight-figure net worth or more. But more importantly, the influence of those two well-financed talkers has altered America's political landscape in fewer than three decades.

Related Topic(s): Billionaires; Clear Channel; Impeach Trump; Radio; Tom Steyer, Add Tags
Add to My Group(s)
Go To Commenting
The views expressed herein are the sole responsibility of the author and do not necessarily reflect those of this website or its editors.