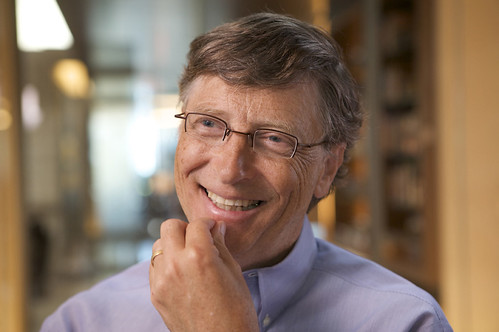 Unfortunately that's not true. After all, we don't expect our multi-billionaire types to be that innovative. But if Gates really did want to help the world, it's hard to envision a better use of $1 billion or so of his money than to post this sort of prize, especially at a time when needless austerity is threatening the survival of the European Union.

In case folks haven't been following it, the basic story is that the insistence on balanced budgets or low deficits in Europe is costing the continent over $1 trillion a year in lost output (over $2,000 per person). Rather than spending money on improving infrastructure, education, health care, and expanding the use of clean energy, the euro zone countries have been cutting back spending with the idea of getting their budgets closer to balance and lowering their debt-to-GDP ratios. These policies have also prevented millions of people across the continent from getting jobs.

The pain being experienced by workers across Europe is undoubtedly a factor in their hostility to immigrants and their turn to right-wing populist politicians. Also the deterioration of public services, like national health care systems, due to needless budget cuts has played an important role in this backlash as well. It is easy for right-wing politicians to blame immigrants for the deterioration in these services even if the real problem is that their government has reduced spending levels. After all, none of the mainstream politicians are making this point.

There are several measures that tell us European governments are not up against any real constraints. The most basic indication of a government running up against the limit of its ability to borrow is that it faces high interest rates on its long-term debt. The interest rate on government debt is currently extremely low across Europe.

The other major factor to assess whether a country is running up against limits is its inflation rate. If an economy is overheating due to excessive government spending or any other cause, we would expect to see the inflation rate rising. We see the exact opposite across Europe with the inflation rate remaining stubbornly close to zero in spite of the efforts of the European Central Bank to raise it towards its 2.0 percent target.

So if there are many great things that can be done with more government spending, in addition to putting people to work, and low interest rates are an indication that the financial markets are begging governments to borrow money, and low inflation means the economy doesn't face any constraints, what's the problem? Here's where Bill Gates' XPrize comes in.

The problem is that many people in leadership positions, especially those from Germany, cling to folk wisdom handed down to them from their parents or grandparents. They are told the story of the hyperinflation in Weimar Germany in 1920s. These leaders seem to hold the view that if we relax budget restrictions, even in a period of economic weakness like the present, we will soon be again confronting Weimar-type hyperinflation.

Of course there is no logic to this position. There are many instances of governments boosting demand with deficit spending. The outbreaks of hyperinflation, especially in wealthy countries, are extremely rare. It would take a long period of reckless spending to push inflation to the point where it poses a serious problem for the European economy.

But even though there is no logic to this German view, it continues to be the basis for economic policy in the euro zone. The XPrize should go to whoever can find a way to explain real world economics to the Germans and their allies so that the euro zone can adopt policies that will get them to full employment and address unmet needs.

Such a change in economic policy would have had enormously beneficial consequences for humankind. In the wake of the Brexit vote, we may need an XPrize winner to keep the European Union alive.

Dr. Dean Baker is a macroeconomist and Co-Director of the Center for Economic and Policy Research in Washington, D.C. He previously worked as a senior economist at the Economic Policy Institute and an assistant professor at Bucknell University. (more...)
Related Topic(s): Austerity; Bill Gates; Brexit; European Stability Mechanism; Financial, Add Tags
Add to My Group(s)
Go To Commenting
The views expressed herein are the sole responsibility of the author and do not necessarily reflect those of this website or its editors.