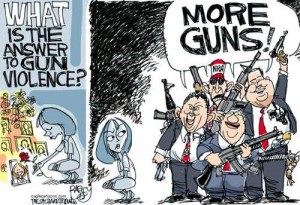 It's been an incredibly violent year so far, Truthseekers, and it's only 19 days old. First the massacre in Arizona; the school shootings in Los Angeles, and then the 14-year-old South Carolina boy who received a .22-caliber rifle as a birthday gift from his father last September who took the gun and shot and killed his father and great aunt, and wounded his elderly grandmother.

Yawn. Just another January in America. Gun violence is a public health issue, plain and simple. To believe otherwise is ludicrous.

Speaking of violence, the world's largest weapons manufacturer just got a little bit bigger. If you live in America, Lockheed Martin, Inc. impacts your life in one way or another. You just can't avoid it, and there's more -- much more -- on the horizon in the world of Really Big Guns.

Quick quiz -- who said this?

"The radicals that you and Washington have co-opted and brought in wearing sheep's clothing -- change the pose. You will get the ends. You've been using them? They believe in communism. They believe and have called for a revolution. You're going to have to shoot them in the head. But warning, they may shoot you. They are dangerous because they believe. Karl Marx is their George Washington. You will never change their mind."

Two guesses and the first one doesn't count.

Give up? Check it out.

Riddle me this, Truthseekers, if some madmen believed their representatives were the kind of "Marxist Revolutionaries" described above, could this possibly incite them to, y'know, shoot them in the head?

Kathy never expected a career in radio as a talk show producer. Born and raised in Atlanta, Georgia, Kathy was completing her nursing degree when in 2001 - in an emergency - she was asked to fill in as the producer of Mike's program. Within a few (more...)
Related Topic(s): Guns; Shootings, Add Tags
Add to My Group(s)
Go To Commenting
The views expressed herein are the sole responsibility of the author and do not necessarily reflect those of this website or its editors.