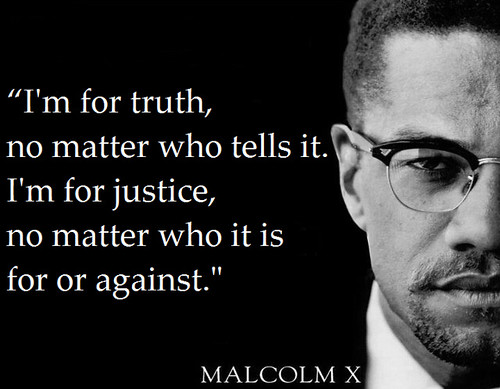 Malcolm X: I'm for truth, no matter who tells it.
(Image by Paulsasleepwalker)   Details   DMCA

The fox and wolf parties - both corporate canines - debate how best to acclimate the masses to their deepening state of precarity.

"The white conservatives aren't friends of the Negro either, but they at least don't try to hide it. They are like wolves; they show their teeth in a snarl that keeps the Negro always aware of where he stands with them. But the white liberals are foxes, who also show their teeth to the Negro but pretend that they are smiling. The white liberals are more dangerous than the conservatives; they lure the Negro, and as the Negro runs from the growling wolf, he flees into the open jaws of the 'smiling' fox. One is a wolf, the other is a fox. No matter what, they'll both eat you." - Malcolm X

Malcolm's analysis of the U.S. duopoly electoral system still holds true. Donald Trump is the wolf that put a mind-lock on a majority of American whites in 2016 by showing his teeth and snarling at Blacks, Muslims and non-white immigrants, stampeding Black folks deeper into the Democrats' open fox-jaws. If Trump is defeated at the polls in November, much of Black America will thank Joe Biden for their salvation, just as African Americans credited President Bill Clinton for resisting Newt Gingrich's racist Republican congressional hordes and their far-right Contract with America, back in 1994. Positioning himself as the only alternative to a Confederate revival - and with the help of Biden, then a young carnivore -- Clinton abolished welfare as we knew it, vastly expanded the U.S. prison gulag, and deregulated the Wall Street banks, smiling through his teeth the whole time.

Clinton's second term coincided with a hi-tech boom that briefly brought the Black-white wage gap to its narrowest point in decades -- for which the fox from Arkansas took credit. But a President Joe Biden will have no such luck. The current Covid-initiated depression - the second U.S.-centered global breakdown of the young century -- has set in motion a deep restructuring that is once again accelerating the hyper-concentration of wealth and power that has characterized capitalism since the late Seventies, under both the wolf and fox parties. As an Oxfam America study reported in July:

"The COVID-19 pandemic has exposed the deep systemic inequalities and massive failures in our economic system, leaving tens of millions of people in the United States without jobs, devastating public services, and bankrupting countless small businesses. Yet as we face our deepest economic downturn since the Great Depression, a subset of companies is experiencing dramatic, windfall profits.

"Seventeen of the top 25 most profitable US corporations, including Microsoft, Johnson & Johnson, Facebook, Pfizer, and Visa, are expected to make almost $85 billion more in 2020 super-profits compared to previous years, new Oxfam estimates show."

"A subset of companies is experiencing dramatic, windfall profits."

In truth, capitalism has always moved inexorably towards greater concentration of wealth. "Disaster capitalists" take advantage of the system's periodic crises to restructure the economy to their further advantage. The fox and wolf parties - both corporate canines - debate how best to acclimate the masses to their deepening state of precarity, so as to avoid a popular revolt. Appeals to white racism - the wolf's howl --have always been effective in channeling the anger and pain of much of white America, although that diversion may not be sufficient to save Donald Trump from eviction, next month. The Democratic foxes, having beaten back a threat from their confused, captive and ineffectual left in the primary process, have assured the ruling oligarchy that, in Joe Biden's words, "nothing would fundamentally change" when he is elected.

When the foxes promise to return the nation and world to stability after the tumultuous Trump years, they do not mean stability in domestic living standards or peace among nations, but a continuation of the neoliberal policies of endless war and austerity -- the Global Race to the Bottom - minus Trump's constant incitement of the "deplorable" half of the white population. For Black people, that augurs a bleak future of deepening immiseration tempered only by the rulers' assurances that Black lives finally do matter.

The job of the Black Misleadership Class - who are the 21st century version of Malcolm's "house Negroes," only now holding high executive and elected positions -- is to vouch for the sincerity of their white corporate overlords and to keep the Black masses in check.

However, Malcolm never despaired of our people's will to resist:

"I believe that there will ultimately be a clash between the oppressed and those that do the oppressing. I believe that there will be a clash between those who want freedom, justice and equality for everyone and those who want to continue the systems of exploitation." - Malcolm X, from an extended interview in the final weeks of his life, in March-April, 1965.

Related Topic(s): Malcolm X, Add Tags
Add to My Group(s)
Go To Commenting
The views expressed herein are the sole responsibility of the author and do not necessarily reflect those of this website or its editors.