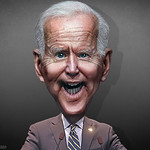 Joe Biden - Caricature
(Image by DonkeyHotey)   Details   DMCA
Like so many others reacting to the record numbers of early in-person and mail-in votes, I indulged the fantasy that a powerful cleansing wave of ballots cast by an angry and disgusted citizenry would wash away our national shame on Nov. 3. It would topple a regime of grifters and incompetents led by an infantile sociopath, and shatter the political party that inflicted it on us. Trump did lose the election, but so much else didn't happen. I was left with a quick dose of intense relief slowly giving way to a mix of confusion and dread.

We can be glad that one of the worst human beings in the world will no longer be President as of January 20, though he has a couple of months to sow more chaos. Perhaps the Democrats will be able to build on the political energy of Stacy Abrams in Georgia and win both fiercely contested Senate run-offs on Jan. 5. That would result in a 50-50 Senate split, with Vice President Harris able to decide a tie vote, giving the Democrats a slender, weak majority.

In a 50-50 Senate, Democrats would need to have total unanimity against a united GOP in order to end the filibuster and pass meaningful legislation to address global warming, economic collapse, soaring economic inequality, and a broken health-care system. Would conservative Democrats cooperate? Remember how hard Obama had to struggle in 2009 to get all 60 Senate Democrats to vote for Obamacare--a corporate-friendly plan originally supported by Mitt Romney and the Heritage Foundation. In the likelier event of a 51-49 or 52-48 GOP Senate majority, Mitch McConnell will be a ghoulish Co-President reigning over an undead Senate for two more years at least.

The 2020 election was further evidence of the weakness and incompetence of the Democratic Party. Although Democrats retained control of the House, they lost 10 to 15 seats. Republicans retained control of 30 state legislatures, with which they can continue to gerrymander districts and engage in voter suppression. As Ryan Grim just reported in Bad News, "Republicans are salivating at the prospect of a gerrymandered 2022 midterm wipeout."

Ironically enough, at the state level Biden's 'victory' really is a continuation of the Obama legacy. As Jeff Cohen pointed out in Common Dreams, under Obama the party lost "nearly 1,000 state legislative seats, while the 50 governorships shifted from a strong Democratic margin to strong Republican majority." The Democrats continue to pay a price for their failure to connect to rural America.

Although Trump lost this time, his share of the total vote went up from 46.1% in 2016 to 47.5% in 2020. He received ten million more votes than in 2016. For the past four years Trump has been an exhibitionist about his moral, intellectual and psychological unfitness. The list of his bad behaviors is too long and familiar to recite here. The ugly götterdämmerung of his administration has two acts. The first is his decision to lie about the severity and danger of COVID-19 after being warned as early as January of 2020. He continued this lie despite hundreds of thousands of infections and deaths, and even discouraged the wearing of masks. For this, he should be classified as a mass reckless homicide.

The second act of the Trumpdämmerung is his ongoing attempt to sabotage the 2020 election. During the campaign, he repeatedly told his maskless MAGA throngs that "The only way we're going to lose this election is if the election is rigged." As late as Nov. 15, Trump tweeted that "He [Biden] only won in the eyes of the FAKE NEWS MEDIA. I concede NOTHING!" The ranks of Trumpists include people openly toting semi-automatic rifles, militant white supremacists, and dazed QAnon conspiracists. Is Trump hoping or fantasizing that his supporters will engage in an armed insurrection to restore him?

Seventy-three million Americans just voted for 4 more years of this. Given their level of unconditional devotion, if COVID hadn't happened, or if Trump had acknowledged the danger of the virus and made himself commander-in-chief of an all-out war against it, it's likely that he would have won the election. What a horrifying thought--the pandemic as savior!

There seems to be no domain of shared facts or even of shared moral values to which we can appeal in an effort to bridge the chasm between Them and Us. There is a rebellion among Trumpists against education, science, expertise, civility, and even rationality and logic as banners of an arrogant ruling class. Trumpists reject a cultured elite who disrespect ordinary people and don't care about the damage done to them by stagnant wages and job insecurity. Trump had a f--k you attitude toward elite values that seems to have lent an appearance of sincerity to his promises of a better life for workers.

Of course, this sort of anti-elitism is self-destructive. 'Truth doesn't matter' is the ultimate lie. But why were so many people receptive to it? The liberal political establishment denounced Trump's rants about "fake news" and "rigged elections" as an assault on "our democracy." But the establishment's professed reverence for democracy is itself a lie that invites the disrespect and cynicism of Trump supporters.

A democracy is supposed to be a society in which the will of the majority drives policy. In ground-breaking research first published in 2014, political scientists Martin Gilens and Benjamin I. Page present compelling evidence that "economic elites and organized groups representing business interests have substantial independent impacts on U.S. government policy, while average citizens and mass-based interest groups have little or no independent influence."

In other words, the United States is an oligarchy or plutocracy, with some democratic trappings such as elections and freedom of speech. We can't expect much from elections that let us choose between two candidates pre-certified as posing no threat to the wealth of those who fund their campaigns.

Related Topic(s): Class; Democracy; Democratic; Democrats; Election; Obama; Oligarchy; Senate; Shame; Trump; (more...) Truth; Workers, Add Tags  (less...)
Add to My Group(s)
Go To Commenting
The views expressed herein are the sole responsibility of the author and do not necessarily reflect those of this website or its editors.