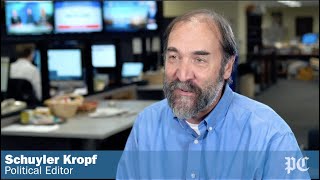 Kropf: I don't think what happened in Iowa or New Hampshire tonight matters a plate of potatoes in the South Carolina race in terms of siding with the winners. It is a complete and total restart, or can be.

Geographically, those two states are places far away from South Carolina, where the results are seen as "association" performances with where the candidates come from. Pete Buttigieg is a Midwesterner, so of course he is going to do well in Iowa. Same with Bernie Sanders and Elizabeth Warren in New Hampshire.

Joe Biden isn't a Southerner, but he comes to South Carolina with deeper associations: Barack Obama, Jim Clyburn and Fritz Hollings. If anything, the results could scare Biden folks into rallying for him if that becomes the message his campaign sends out forcefully.

But this is the FIRST RACE HERE OF ANY KIND IN DECADES in South Carolina where Democrats have ballot choices. For the past 25 years, Democrats have been clobbered in every statewide race, whether the candidate has some credibility or is a complete inexperienced long shot. None of these races since the 1990s have been competitive as the state went solid red, be it for governor or US Senate.

The lack of choices was especially a factor in 2008, when Barack Obama smashed Hillary Clinton, and then four years ago when Clinton won in a walkaway, even to the point that Sanders left the state early before the primary. So of course the favorites won.

But now Democrats have a dozen people on the ballot. They are ecstatic. With 6-7 new fresh voices Democrats have to pick from, both men and women, that is what is really confounding the so-called Biden firewall collapse.Sanders, Steyer, Warren, even Yang and Bloomberg, have their followers now, which is like I said the rarity in a Democratic primary as the electorate spreads out and sprinkles across the board. Even if Buttigieg is hypothetically polling at 10%, that's 35,000-plus voters in his camp in the state (assuming the turnout is above 2016's 350,000).

Cillizza: What is the current state of the race in South Carolina? Biden comfortably ahead?

Kropf: Biden is ahead horse-race style, but I don't know about comfortably. We did a survey of the 46-county party Democratic chairs and most all mentioned Biden's name first as being the candidate at the top of their community's interest. That's good news for him. But we described it as more as a "shrug" of support than clapping enthusiasm. Sanders, Warren and Steyer all got votes from the chairs so it means Democrats are looking around, which is not what the Biden people want. The big question that's to be determined is, what will non-committed Democrats do in three weeks, make a pick on some policy choice or play ping-pong in their heads over who has the best chance in the fall of defeating Donald Trump?

Cillizza: How much of a presence have the candidates had in South Carolina? Who has been in the state the most? Who is seen as having the best organization?

Kropf: Cory Booker and Kamala Harris made the most stops in the state, but they are long gone. Who's next among the current candidates? Steyer, with 38 events. Biden, meanwhile, is way down the appearance list at 23. Steyer has made significant outreach to the black community, which will be better than 60% of the turnout in the primary. He's doing more advertising and home mail outs than anyone. It shows what can happen with an unlimited budget. Even if he finishes behind Biden here by 10 points, it's a huge bounce toward Super Tuesday.

Cillizza: Is there an "average" or "typical" South Carolina Democratic primary voter? What does he or she look like? What are his or her politics?

Related Topic(s): Biden Dropping In South Carolina Losing African Am; Chris Cillizza; Dalhi Myers South Carolina Official Switched From ; South Carolina Primary, Add Tags
Add to My Group(s)
Go To Commenting
The views expressed herein are the sole responsibility of the author and do not necessarily reflect those of this website or its editors.