Gen. Lloyd Austin, o n the Raytheon Board, is yet another high-level Biden nominee enmeshed in D.C.'s corporatist "revolving door" of legalized influence-peddling 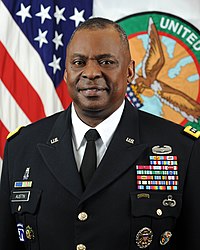 Joe Biden's pick to be the next Secretary of Defense, according to reports on Monday night, is recently retired Gen. Lloyd J. Austin, III. The choice of Gen. Austin further erodes the once-sacred American norm that military officials will be barred from exercising control over the Pentagon until substantial time has passed after leaving active-duty military service.

Before Gen. Austin can be confirmed, Biden will need a special waiver from Congress under the National Security Act of 1947. That law, a cornerstone of the post-World War II national security state, provides that "a person who has within 10 years been on active duty as a commissioned officer in a Regular component of the armed services shall not be eligible for appointment as Secretary of Defense."

Enactment of the law after the war, explained the Congressional Research Service, was imperative to "preserve the principle of civilian control of the military at a time when the United States was departing from its century-and-a-half long tradition of a small standing military." A 2008 law reduced that waiting period to seven years, but Gen. Austin, who retired from the U.S. Army only four years ago, in 2016, still falls well within its prohibition.

Biden's choice of Gen. Austin was somewhat surprising in light of the widespread expectation that he would instead tap long-time Pentagon operative Michèle Flournoy, who would have made history as the first woman to run the Defense Department after serving as Obama's Undersecretary of Defense for Policy, the Pentagon's highest-ranking woman in history.

But Flournoy's nomination encountered problems after The New York Times last week said her appointment would present a "test of transparency and ethics" in light of her heavy involvement during the Trump years in a consulting firm, WestExec Advisors, and an investment fund, Pine Island Capital Partners. Those are classic D.C. "revolving door" corporate entities which exploit the access and influence inside the Pentagon and other government agencies of their principals, former top-ranking national security officials, to use their influence within the agencies they once ran to secure lucrative weapons purchases and similar government contracts for their undisclosed corporate clients. These are not just ethical problems of the past; as the Times noted, officials who have done this "bring with them questions about whether they might favor or give special access to the companies they had worked with in the private sector."

Related Topic(s): Biden Appointments; Cabinet; Chief Of Staff John Kelly; Generals; Military; Pentagon; Presidency; Raytheon; Security; Staff, Add Tags
Add to My Group(s)
Go To Commenting
The views expressed herein are the sole responsibility of the author and do not necessarily reflect those of this website or its editors.