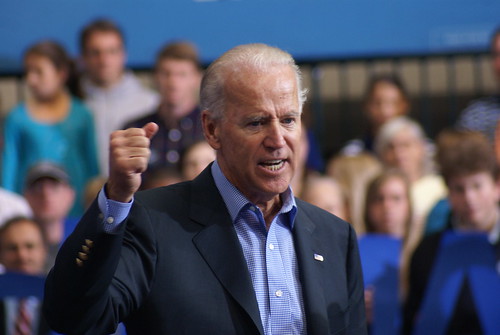 I didn't watch the last Democratic presidential primary debates because I figured that without Tulsi Gabbard in there shaking things up it would be a boring, vapid parade of insubstantial verbal foam, and I love myself too much to go through such a horrible ordeal. By all accounts my prediction was correct, but I did miss one thing that's been making the rounds in video clips for the last couple of days which I find absolutely bizarre.

Most of you have probably heard about Biden's infamous "record player" comment by now, but for those of you who missed it, Biden was asked by debate moderator Linsey Davis to defend some comments he made about America's problems with racism in the 1970s, and he responded by essentially saying that Black people don't know how to raise their kids so they need to be taught how by social workers. Biden has been receiving mainstream criticism for his racist and paternalistic position, along with plenty of mockery for saying that parents need to be told to "make sure you have the record player on at night" so that kids hear enough words in early childhood.

It is pretty clear that Biden was trying to communicate an idea that is premised on a deeply racist and condescending worldview, so it's to be expected that people would want to talk about that. It's also to be expected that people would be making jokes about how the cute old man said "record player" like a grandpa. But what isn't being discussed nearly enough is the fact that what Biden said was also a barely coherent, garbled word salad stumbling out of a brain that is clearly being eaten alive by a very serious neurological disease.

I've typed out a transcript of what Biden actually said, verbatim. There are no typos. I've also noted where Biden closes his eyes, probably to concentrate, which he does whenever he seems to be struggling especially hard to string words together. Try to read through it slowly, word-for-word, resisting the instinct to mentally re-frame it into something more coherent:

"Well they have to deal with the Look, there is institutional segregation in this country. And from the time I got involved I started dealing with that. Redlining. Banks. Making sure that we're in a position where Look, talk about education. I propose that what we take is those very poor schools, the Title 1 schools, triple the amount of money we spend from 15 to 45 billion a year. Give every single teacher a raise that equal [closes eyes] raise to getting out the sixty-thousand dollar level.

"Number two: make sure that we bring into the help the[closes eyes] the student, the, the teachers deal with the problems that come from home. The problems that come from home. We needWe have one school psychologist for every fifteen hundred kids in America today. It's crazy. The teachers are recaNow, I'm married to a teacher. My deceased wife is a teacher. They have every problem coming to them. [Closes eyes briefly] We have make sure that every single child does in fact have three, four, and five year-olds go to schoolschool, not daycare. School. We bring social workers into homes of parents to help them deal with how to raise their children. It's not that they don't wanna help, they don't wantthey don't know quite what to do. Play the radio, make sure the television, [closes eyes tightly] the 'scuse me, make sure you have the record player on at night, the-the-the-the phone, make sure the kids hear words. A kid coming from a very poor school, [closes eyes] a very poor background, will hear four million words fewer spoken by the time they get there".

Notice how it gets more garbled the longer he speaks. The response I transcribed was about eighty seconds in length. That was just one small part of a debate in which the former vice president performed no better and forgot three of his fellow candidates' names.

Here are a few examples:

"Don't pretend you didn't understand what he was saying."

"Actually, I recently saw a turntable for sale at Best Buys & vinyl records are back on the market. Try to keep up, WaPo."

"My 22 year old son and all his friends play records on record players these days. If you're insinuating that Joe is out of touch, you're out of touch."

"Actually currently, there are some people playing record players because they find the vinyl record has better sound quality. I think you are just picking and choosing who to go after."

"He was saying they not hearing enough words. We did. We were read to. We listened to children's albums. We had conversations. He was trying to get at the importance of those things. He didn't do a great job on communicating it but he was right."

"Twitter snark aside, there are studies to back up that claim."

Related Topic(s): Brain; Brain Dead; Brain Net, Add Tags
Add to My Group(s)
Go To Commenting
The views expressed herein are the sole responsibility of the author and do not necessarily reflect those of this website or its editors.