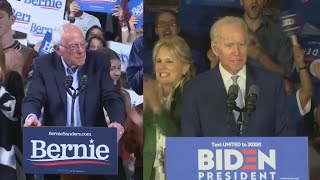 The two top Democrats in the race for the party's presidential nomination, former Vice President Joe Biden and Senator Bernie Sanders, issued appeals Thursday to the Trump administration and congressional Republicans for joint action on the growing coronavirus crisis.

The policy prescriptions advanced by Biden and Sanders were aimed at demonstrating to the US ruling elite that they took the coronavirus crisis seriously, and that unlike Trump, they were capable of considering the interests of American capitalism as a whole, and not just their short-term personal political advantage.

Both speeches were hastily scheduled after Trump's disastrous nationally televised address on Wednesday night, which was widely derided in the media and which touched off a global wave of selling in the financial markets, including a record one-day fall in the Dow Jones Industrial Average.

The two Democrats spoke for about 15 minutes each, without an audience and without taking questions from the press. They offered policies that were quite similar and were likely coordinated between the two campaigns and House Speaker Nancy Pelosi, who is drafting her own coronavirus emergency legislation.

Both candidates attacked the Trump administration for its obvious failure to develop and promote a testing protocol adequate to the situation, with the US testing only 11,000 people since the coronavirus epidemic began to spread, compared to 10,000 people a day in South Korea, a country with only one-sixth the population and half the per capita Gross Domestic Product of the United States.

Biden proposed a three-point program: free availability of coronavirus testing to all at no charge; a surge in capacity to prevent and treat the disease, including emergency construction of new hospitals; and accelerated development and treatment of a vaccine. He did not attempt to explain why American society had proven incapable so far of such common-sense measures, other than to blame Trump.

However, the failure to administer millions of tests is not just due to Trump. It is a consequence of the subordination of the US health care system to profit interests to a degree that surpasses any other country, a subordination that was only intensified by the Obamacare program that Biden helped push through Congress and supports enthusiastically to this day. Far from guaranteeing healthcare as a human right, the Affordable Care Act guarantees insurance companies paying customers by forcing the uninsured to buy policies they cannot afford.

While criticizing Trump's response and declaring, with some justification, "Public fears are being compounded by pervasive lack of trust in this president," Biden sought to reassure the public that American capitalism is fully competent to address the coronavirus if only it had a better commander-in-chief -- i.e., himself.

He called on Trump to order the Federal Emergency Management Agency and the Department of Defense to devote their resources to building new temporary hospitals "to treat patients in any city in this country," claiming that the military had to "prepare for the potential deployment of the resources to provide medical facility capacity and logistic support that only they can do."

Why only the military has such capacity, in the wealthiest country on the planet, Biden did not address. There has been bipartisan support for decades of massive military spending, including most recently the enactment in December of a record $738 billion budget for war, with majority support from both the Democrats and Republicans.

Senator Sanders began his address with the remarkable declaration, "We have to face the truth, and that is that the number of casualties may actually be even higher than what the armed forces experienced in World War II." This figure -- some 405,000 deaths -- is far greater than any other American politician has suggested, although it is much lower than the worst-case scenarios of public health professionals.

Sanders called on President Trump to declare a national emergency, but then suggested that this was unlikely to happen, because "we have an administration that is largely incompetent and whose incompetence and recklessness have threatened the lives of many, many people in our country."

Patrick Martin writes for the World Socialist Website (wsws.org), a forum for socialist ideas & analysis & published by the International Committee of the Fourth International (ICFI).
Related Topic(s): Bernie Sanders; Corona Virus Coronavirus Covid-19; Democrats; Government; Joe Biden; Legislation; Trump, Add Tags
Add to My Group(s)
Go To Commenting
The views expressed herein are the sole responsibility of the author and do not necessarily reflect those of this website or its editors.