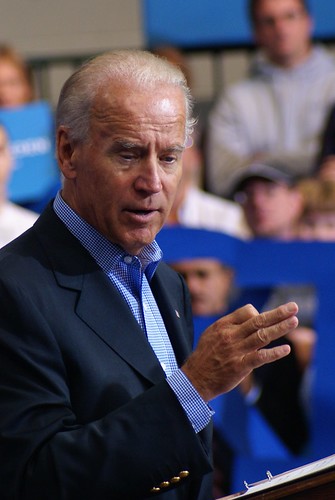 Biden's "dumb things" can be divided into two categories. First, he often says things that just simply aren't true. He embellishes his stories and, indeed, he sometimes just makes them up out of whole cloth. His plagiarized speech in 1987, when he essentially stole the life story of former UK Labour Party leader Neil Kinnock, forced him to drop out of the race. More on that in a minute. At least nobody gets hurt when Biden starts riffing.

Second, and more troubling, Biden is often wrong on the issues -- really, seriously wrong -- at least where progressives are concerned. And his knee-jerk reaction is to double down before finally admitting his mistake and hoping that people just forget about it.

Earlier this week, Biden felt compelled to defend himself against accusations that he may be too "old fashioned" for today's Democratic Party. He tried to turn that into a positive, saying that his old traditionalism harkened back to a better era, where gentility reigned in the US Senate. That wasn't good enough, though. Biden felt compelled to give an example. And so he said, with a completely straight face, that when he was first elected to the Senate in 1972 he became friendly with two of the most rabid segregationists in the body Senators James O. Eastland (D-Miss.) and ("the meanest man I ever met") Herman Tallmadge (D-Ga.). According to a reporter for The New York Times who heard the words directly from Biden's mouth, "I was in a caucus with James O. Eastland. He never called me 'boy.' He always called me 'son.'" And Biden told this story with a southern accent. Seriously. It apparently never occurred to him that Eastland never called him "boy" because he was white.

As New York Mayor Bill de Blasio remarked on Twitter the next day, "It's 2019 & @JoeBiden is longing for the good old days of 'civility' typified by James Eastland. Eastland thought my multiracial family should be illegal and that whites were entitled to 'the pursuit of dead n**gers." Biden has no idea what he did wrong.

How could Biden work with the likes of Eastland and Tallmadge, let alone wax poetic about their relationship? What could they possibly have in common? Well, as he has repeatedly told reporters, "Delaware was a slave state."

Race aside, Biden has been tone-deaf on a number of issues of major importance to progressive voters. He supported and repeatedly voted to fund the wars in Iraq and Afghanistan. He attacked and humiliated Anita Hill during the Clarence Thomas Supreme Court confirmation hearings. He supported and voted for the Hyde Amendment, which blocked the use of Medicaid to pay for abortions. He wrote the federal government's civil asset forfeiture law along with another of his segregationist pals, Senator Strom Thurmond (R-S.C.)

Biden also has something of a reputation as a liar. His lies are relatively minor entertaining, even. But they're lies nonetheless. Why would somebody who has accomplished as much as Joe Biden has, lie about his background? Isn't that what we criticize Donald Trump for doing?

Take this wonderful Biden quote from The New York Times: "When I marched in the civil rights movement, I did not march with a 12-point program. I marched with tens of thousands of others to change attitudes. And we changed attitudes!" That's great, except that Joe Biden never marched in the civil rights movement. Never. His aides, according to the Times, have "gently reminded him" that the story simply isn't true. But he keeps telling it anyway.

This penchant for hyperbole and weakness for plagiarizing the work of others has caught up with Biden in the past. He had to drop out of the 1988 race for president after a Dukakis campaign staff member gave a Washington Post reporter a videotape showing UK Labour Party leader Neil Kinnock and Biden side-by-side. Kinnock said, "Why am I the first Kinnock in a thousand generations to be able to get to university?" Then referring to his ancestors, some of whom worked in the coal mines, he said, "Was it because all our predecessors were thick? Those people who could sing and play and recite and write poetry? Those people who could work eight hours underground and then come up and play football?"

Biden, in his own speech, said, "Why is it that Joe Biden is the first in his family ever to go to a university? Is it because I'm the first Biden in a thousand generations to get a college and graduate degree? That I was smarter than the rest? Those same people who read poetry and wrote poetry and taught me how to sing verse? Is it because they didn't work hard? My ancestors, who worked in the coal mines of northeast Pennsylvania and would come up after 12 hours and play football for four hours?"

Besides stealing the language from Kinnock, Biden never had any relatives who worked in the coal mines.

2020 marks the third time Joe Biden has run for president. He self-destructed in the Kinnock affair in 1987. In 2008, he dropped out the day after the Iowa caucuses after coming in fifth and securing less than one percent of the vote. Now, in 2019, after having been Vice President of the United States for eight years, he can only muster 32 percent in the latest polls. That's not a ringing endorsement.

The truth of the matter, at least in my view, is that the country doesn't want a "President Joe Biden." We've tested him out over the past 31 years and we've decided that we just don't like this model. Biden is no longer the young firebrand from the 70s. He's become the senior statesman that he always campaigned against. It's just that he doesn't yet see that his time has passed. It's time for a change.

Related Topic(s): Caucus; Idealogy; Issues; Joe Biden; Weakness, Add Tags
Add to My Group(s)
Go To Commenting
The views expressed herein are the sole responsibility of the author and do not necessarily reflect those of this website or its editors.