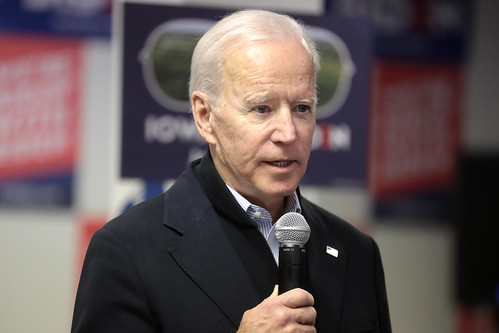 Should Joe Biden become the eventual Democratic Party presidential nominee, and it seems highly likely that he will, I fully intend to vote for him. Under no circumstances would I consider voting for Donald Trump. I should take a moment to say that the moral and constitutional urgency to remove Trump from the Oval Office is extreme. Which means that sitting the election out is out of the question.

That having been said, I am struggling with the notion of formally endorsing Joe Biden. The draconian steps to which the Democratic Party and their major media benefactors went to defeat the Sanders campaign raise deep fundamental, political, social, and constitutional concerns. The destruction of the Sanders campaign was not just undemocratic, it was anti-democratic. Is that worse than Trump's naked assault on democracy?

I believe the Democratic form of anti-democracy, while less apparent at first glance than Trump and his Republican enablers' full-frontal style, is actually more likely to succeed and do more damage in the long run. The Democratic approach is more cleverly packaged and marketed and therefore will generate less resistance.

It is significant that despite all this, Bernie Sanders has rather wholeheartedly endorsed Joe Biden. He is even signaling optimism that Biden may be open to progressive initiatives. The question that does not address is if the party went to those lengths to defeat the most popular democratic candidate, what will they do with power if they get it?

It isn't even about Bernie Sanders, who I deeply respect and admire. It is about the progress we progressives have dedicated our lives to achieving. Progressive politics is not a cult of personality, it's a cult of policy. Progressives actually do pay attention to what elected officials do in office and have a clear agenda for what needs to be done. We want leaders who will fight, really fight for social and economic justice, equality, the environment, voting rights, and a foreign policy that does not depend on military might.

For the record, the real source of tension between the Democratic Party and progressives is not elect-ability. Elect-ability is a colossal red herring the Democrats drag out every election cycle to convince voters that they can't have the policies they want. The real source of tension is reform. A central focus of Progressive politics is getting the money out of the political process. That's where the rift between the Democrats and progressives occurs. That's why Bernie Sanders had to be taken down.

Since Joe Biden rode a wave of African American voter support to the nomination let's start there. There is an awakening across the nation to the issue of police violence against black people. Long overdue in the eyes of the black community and social justice advocates. Be aware that throughout his career, Joe Biden has been staunchly pro-law-and-order and pro-cop. If the past is prologue, President Biden will say all the right things, but make sure America's finest will have everything they need and more to maintain law and order. He will not be a champion for meaningful police reform.

On foreign policy, you can expect Biden to move swiftly to repair the very significant damage Trump has done to US relationships with its traditional post-WWII allies. On the other hand, you can also expect a return to good old American interventionism in the affairs of other nations, with all the geopolitical complications and harm that has historically entailed. US global influence is big business, and Joe Biden will be there for them.

On labor, Joe Biden is a prototypical old guard, corporate-friendly Democrat. That camp of Democrats has held power and influence during the longest decline in the fortunes of the American worker since the Great Depression. Yes, you can draw a straight line between the old guard corporate friendly policies and the decline of the American worker.

On the environment: Biden's apparent deep concern for the state of the environment seems sincere at this stage. That can perhaps be taken at face value. Compared with Trump's chainsaw assault on environmental policy, Biden is likely to be far better. But there is a caveat -- if Biden really tries to implement environmental policies that have a meaningful impact, he'll quickly find himself answering to the corporations the Democrats serve, and that might not go so well.

This is where we find out who Joe Biden intends to be as President. It will be the first material, official action he takes in the presidential process with the potential for consequences.

Related Topic(s): Biden Endorsement; Democrats; Politics; President; Progressives; Trump, Add Tags
Add to My Group(s)
Go To Commenting
The views expressed herein are the sole responsibility of the author and do not necessarily reflect those of this website or its editors.